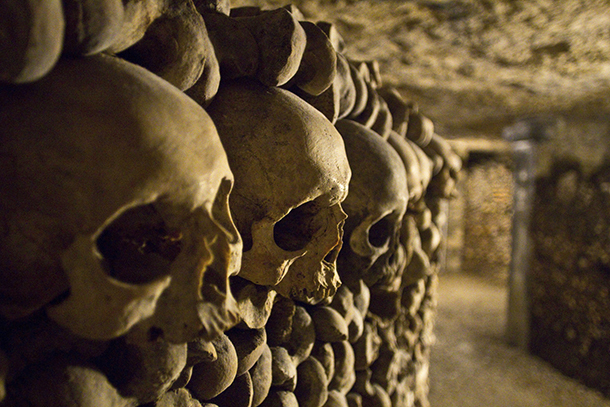 Airbnb and Paris have a complicated past, but the two may have finally put their differences behind them by way of one incredibly macabre room listing—Halloween night in the city’s catacombs.

If you’ve longed to sleep inside a 200-mile underground labyrinth lined with 6 million skulls, but worried about the cost of such a luxury, don’t—Airbnb will pick up the tab. The vacation-rental platform just launched a sweepstakes that will grant one lucky winner a bedroom within the terrifying tunnels for the night of October 31.

But you don’t have to go it alone—the double-occupancy listing allows for two people. The experience includes a historical tour of the site, dinner, a «private concert,» and a bedtime storyteller who will share the tales of the massive tomb. A plus-one will likely come in handy in fighting off nightmares and whatever else the night will produce after that itinerary.

All participants have to do to join Les Innocents (for one night, at least) is log onto Airbnb and submit up to 550 words explaining why they think they are brave enough to sleep in the catacombs. The website will notify a winner after October 21.

The room is likely more luxurious than some Airbnb listings, as it provides a real bed—sleeping with the dead apparently earns you more than a fold-out couch or futon. Breakfast is also provided, should you last the night.

The Catacombs, known as «The World’s Largest Grave,» were created in the late 18th century as a bone repository for the overflowing Cemetery of the Innocents. «Les Innocents» had been the crowded city’s main cemetery since the Middle Ages, and had become a source of sickness. So, the remains—mostly from mass graves—were dumped 65 feet underground. The Catacombs opened to the public soon after, and have been a strangely popular tourist attraction ever since.

«Bienvenue to the bowels of Paris!,» the listing reads.