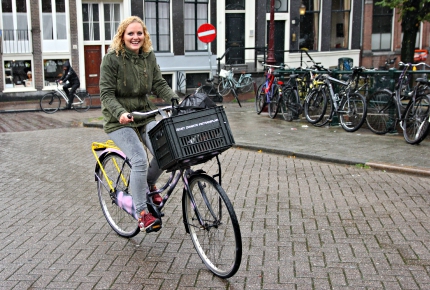 Having a backie with a local is the latest way of getting around Amsterdam. Gavin Haines goes for a hair-raising ride across the Dutch capital.

“So, do you have many accidents?” I ask Maaike, whilst inadvertently touching her bottom. “Sometimes, but mostly when I’m texting.” It’s not the response I was hoping for as we wobble through the streets of Amsterdam on her rickety bicycle, but I appreciate her honesty.

I also appreciate her generosity: despite the torrential rain and chilly breeze, Maaike has agreed to give me a lift across the city on the back of her bike. She did it with a smile, too, dismissing the grim weather as “typically Dutch”.

Maaike is one of a handful of Amsterdammers to sign up to a novel ride-sharing scheme called Yellow Backie, which offers a new way of getting around Amsterdam for tourists and promises to be a conduit for conversation between locals and visitors. The initiative is the brainchild of cycle hire company, Yellow Bike, which currently has 100 “ambassadors”, like Maaike, across the city.

"We wobble through Amsterdam."

“Some of the local papers have been writing about there being too many tourists recently,” explained Martin Luyckx, Yellow Bike’s marketing manager, who I met earlier that day. “So we thought we’d do something to show that not all Amsterdammers are against tourists.”

To ride pillion with a local, tourists have to keep their eyes peeled for cyclists with yellow luggage racks and shout “backie” when one of them goes past. The rider will then pull over, ask where you’re heading and tell you to hop on, assuming they’re going in the same direction. Refreshingly, there’s no app; it’s about being in the right place at the right time, leaving it to lady luck rather than a boring smartphone.

“It’s really fun to meet tourists,” says Maaike, riding past a row of window brothels, where elderly hookers strut their stuff. “So far I have given a backie to four people. I met a cool girl from Latvia and I’m going to Latvia in three weeks – we exchanged numbers and I will definitely get in touch.” 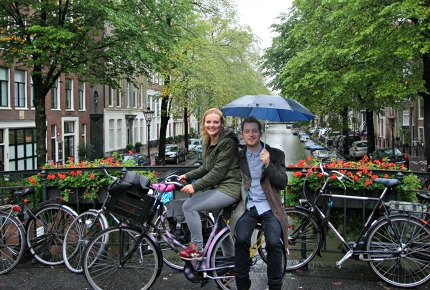 We reach a bridge and Maaike has to stand on her pedals to get us over it. I ask if I’m her heaviest passenger. “Erm, I don’t think so,” she says, politely. And then it happens: the collision. Blindsided by my umbrella, we crash into another cyclist on the bridge, a middle-aged woman, also clutching a brolly. I fall off, but stay on my feet. So does Maaike. We make our apologies and hop back on the bike, giggling through the embarrassment as we flee the scene.

The rain continues as we rattle through trendy Jordaan. Maaike isn’t hanging around.

“I’m a speedy rider,” she laughs, overtaking slower cyclists, who look on with bemusement. “I go as fast as I can all the time and I think to myself: ‘why am I doing this? I’m not in a hurry’.”

"And then it happens: the collision."

A tour guide by trade, Maaike points out local landmarks – Anne Frank’s House, Western Church, Prinsengracht canal – and tells me about herself. She’s just completed a masters degree in International Security and is debating whether to jump on the career ladder or enjoy being footloose and fancy-free for a while.

As the coversation gets more profound, Maaike and I settle into a rhythm on the bike. “We were shaky to start, but now we’re smooth,” she says, tempting fate. And fate bites. As we round a corner, a man pushing a trolley across the road gets in our way. Maaike takes evasive action. “That was a close one,” she laughs. I grimace.

Getting a backie across Amsterdam isn’t comfortable – after 10 minutes my backside is numb and I suspect Maaike’s legs are knackered. It’s not without its hazards either, as we have proven. But it’s a free, eco-friendly and fantastic way to get to know locals. It’s also a lot of fun.

“And that’s all that matters,” says Maaike, before bidding me farewell and disappearing into the rainy day.

The Yellow Backie scheme currently has 100 members, which will increase to 250 by the end of the year. To hail a ride, tourists must shout “backie” when they see someone cycle past with a yellow luggage rack. It’s then a case of hopping on the back and letting the adventure commence.

Thanks to Maaike for her efforts in the saddle. And thanks to the guys at Clink Noord, who accommodated Gavin in their brand new hostel while he was researching this story.

Enjoyed this article? Then you might like this:
10 of the best coffeeshops in Amsterdam
Why are Amsterdam’s coffeeshops closing?