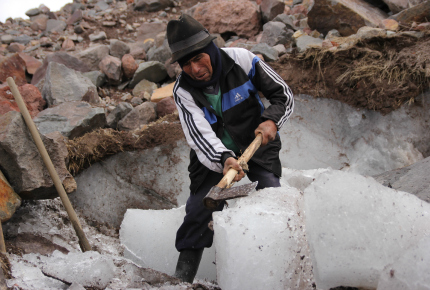 Just when I thought things couldn’t get any worse, dogs attack me. I leap onto a grassy mound and try to kick the canines, one of which has my leg in its mouth.

Alerted by the fracas, Baltazar Ushca strides out of his house and shouts at his trusted pooches. Mercifully they desist. I breathe a sigh of relief and wipe the slobber from my leg.

Baltazar is best known in his homeland as the Last Iceman of Ecuador. Every week he scales Chimborazo, an inactive volcano in the Andes, to chip hulking blocks of ice off the glacier, which he sells at the market in Riobamba city.

Fridge freezers have all but killed his trade, but he has a few loyal customers and defiantly ploughs on: the last man standing in a defunct industry.

In a bid to diversify, I’d heard Baltazar was taking hardy hikers up Chimborazo, whose 6,268m (20,564ft) summit is the closest point on Earth to the sun, thanks to something called the equatorial bulge.

I was in my Riobamba hotel room when I got the call. “There’s a small problem, Gavin,” my contact said. “Baltazar’s daughters want you to give him $1,000.” I laughed, put the phone down and sat angrily on my bed, cursing this damned assignment. 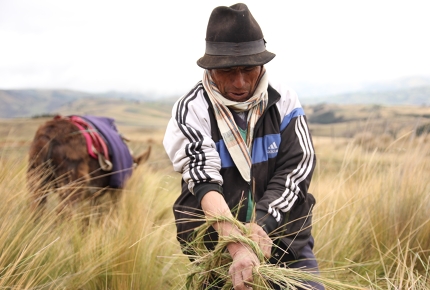 The following morning, Daniel, a guide from Riobamba Tourist Board, picks me up from my hotel. We speed through the city and the Chimborazo foothills to Baltazar’s house, where his dogs attack us at sunrise.

Baltazar lives in a pink house, bought for him by executives at an Ecuadorian TV station, who made a documentary about his redundant profession. Music blares from inside, while pigs noisily quaff their breakfast outside.

Surrounding the house are broken children’s toys, a washing line draped with damp clothes and a wonky hutch full of guinea pigs, an Ecuadorian speciality.

Wrapped in warm clothes – a mix of traditional ponchos and tired Adidas jackets – Baltazar and his family gather outside their home.

The daughters are still demanding $1,000, unaware that the only vocation less lucrative than the ice business is travel journalism. The guys from the tourist board negotiate a more realistic fee and, finally, we set off to climb Chimborazo.

As we walk through Baltazar’s village, Cuatro Esquinas, the sunshine tries hopelessly to burn through the clouds. Stray dogs play in the dusty streets and shepherds steer their flock to new pastures.

Baltazar’s tiny frame is carried by his trusty donkey, Jole, who will transport him up the mountain. We’ll follow him on foot. 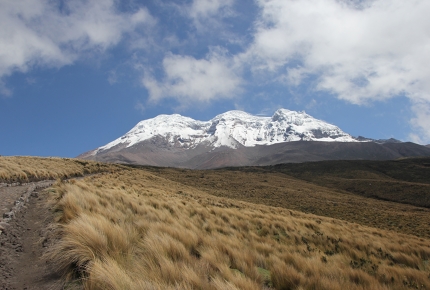 We hike through Chimborazo’s grassy foothills, where Baltazar jumps off Jole and gets his scythe out. He starts hacking at the meadow, cutting long strands of grass, which he weaves with impressive speed into ropes and baskets.

“It’s for carrying the ice,” explains Daniel, as Baltazar fashions his holdalls. “His father taught him how to do this.”

Collecting his other donkeys, Widinson and Luis Guaman, the diminutive iceman bids us farewell and sets off up the mountain. “It takes three hours for him to mine the ice,” says Daniel. “We’ll meet him up there.”

As we climb Chimborazo, gentle foothills give way to steep, rocky bluffs. The air gets thinner, the temperature plummets and the breeze becomes a bitter gale, mocking me as it blows through my clothes.

I remember the looks people had given me when I said I was climbing Chimborazo. “Wow. That will take some courage,” said Klaus, a friend of mine in Quito.

Unable to look up and admit the challenge ahead of me, I stare at my shoes, which occasionally traipse through fresh donkey poo. “Are you okay?” asks Daniel. I stop, unable to walk and talk. “Yeah,” I lie, breathlessly.

We climb, mostly in silence, listening to the wind howl between the rocks. Occasionally Daniel points out a flock of vicunas, a close relation of the llama, which eke out lives in this inhospitable land.

We’re high now. My breathing has become laboured. Nausea has kicked in. My head throbs. “I know this is important to you, but maybe we should turn back,” says Daniel. I shake my head and point to the mountain. We press on. 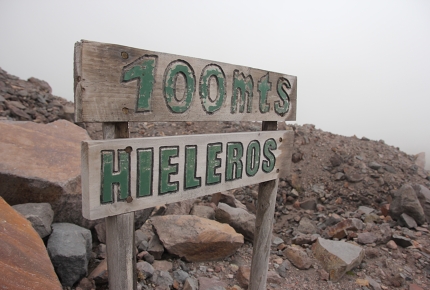 Before long, we arrive at a sign. “100m, Hieleros,” it reads, which means iceman. “Not far,” says Daniel, encouragingly. I climb the last 100m, growing wearier with every step.

We find Baltazar hacking the glacier with his axe. I sit down and watch him drive the blade into the ice, while his donkeys look on bemusedly.

He prizes a huge block of ice off the glacier and breaks it into smaller pieces.

“A lot of people used to do this work,” he says, flashing a smile that exposes brown teeth. “But because of technology people don’t need the ice any more.”

But Baltazar refuses to be beaten. He climbs Chimborazo every Thursday and Friday, collects approximately 10 blocks of ice and sells it at the Saturday market. Each block sells for $5.

“It used to be $2, but since he became famous he can charge more,” says Daniel. “The ice is used for drinks and ice cream.” It’s special because it came from Chimborazo and not a boring fridge-freezer.

I shiver against a rock, feeling nauseous, while Baltazar chips at the glacier. Huge boulders perch precariously above him. “The rocks can fall down,” he says. “It’s dangerous work.”

Clouds roll in, threatening snow, and the wind picks up. Occasionally there are blizzards up here, but that doesn’t deter Baltazar. “He comes whatever the weather,” says Daniel.

If Baltazar has his way, he will not be the last iceman of Ecuador.

“My son-in-law is going to be the new iceman,” he says. “We have an agreement – when I stop, he will continue the work.”

So does he have plans to retire, then?

“No,” he says, flashing me that brown smile again. “I love this work. I will do it until I go to God.” 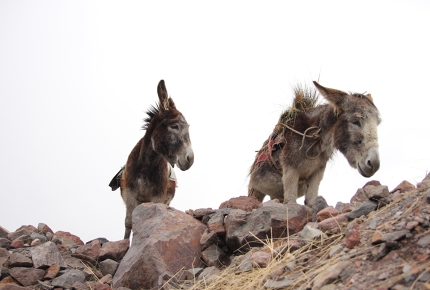 KLM (www.klm.com) flies from London to Quito via Amsterdam. Buses to Riobamba depart regularly from Quitumbe bus station in the Ecuadorian capital. For trips to Chimborazo or to see the iceman, get in touch with the Ecuadorian Tourist Board (www.ecuador.travel).