Домой Путешествия Why do Ecuadorians thrash their children with nettles? 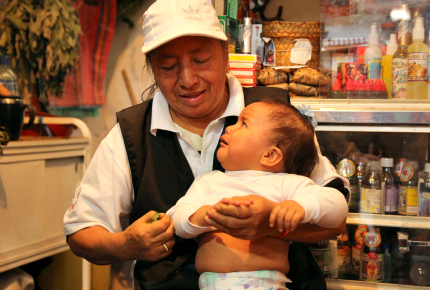 Gavin Haines meets the traditional healers of Quito, who flay children with herbs and do strange things with guinea pigs.

“This soap will make you irresistible to women,” winked the salesman in San Francisco Market. “But only if you use it every day – if you don’t, you’ll be irresistible to men.” I stuffed $5 into his dirty hands and walked off, leaving him to enjoy his own joke.

And that’s when I heard it: the child crying. Not a cry for food or attention, but a caterwaul loaded with distress. A shiver ran down my spine.

Concerned for the nipper’s safety, I followed the cries to a nearby stall where I found a curtained-off room. Still clutching my soap, I peeled back the frayed fabric and looked on in horror.

A screaming toddler was being restrained on her mother’s lap, while an elderly lady rubbed nettles on her legs and blew cigarette smoke in her face. Marlboro Reds they were.

“She’s being cured for nightmares,” a fellow shopper explained, as I was shooed away by the angry women. “Cured?” I scoffed. “Surely that’s the stuff nightmares are made of.”

There was no need to call social services, a friend told me later that day. Apparently, the woman was a traditional limpia (healer), practising time-honoured Andean treatments that go back many centuries. I pulled my unconvinced face and didn’t mention it again.

That was two years ago and today I have returned to San Francisco Market to learn more about these healers and their ways. Accompanying me is my friend, Adriana, a Quito resident who indulges my fancy for healers and aphrodisiac soaps.

We wander around the market, shuffling down aisles lined with greengrocers, juice vendors and butchers, where women in bloody aprons stack piles of severed cows’ feet. They make a mean soup, Adriana tells me. 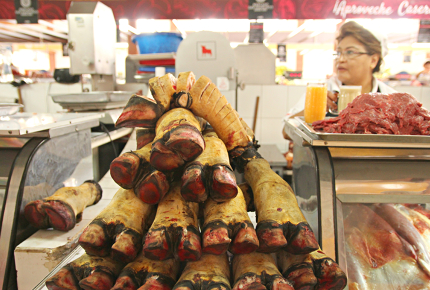 Bring out the guinea pig

Bovine offcuts give way to giant bunches of mint, lemon verbena, laurel and other herbs as we arrive at the limpia stalls, where memories of crying children flood back to me.

Adriana leads me into the kiosk of Dona Rosa Lagla, a fourth-generation healer, who, as luck would have it, is about to perform a treatment on a young child suffering from, you guessed it, nightmares.

“She gets up in the middle of the night and she is crying,” says Dona Rosa, undressing the toddler. The bemused child flicks panicked looks at her mother and Dona Rosa, before erupting into tears. I shuffle uncomfortably.

“The treatment takes away the bad,” reassures Dona Rosa, rubbing the sobbing child with various herbs.

This is the first step of limpia, apparently, and the suffering is said to help children gain control of their feelings and emotions. But the tears keep coming.

Apparently, the second stage of this process will be much more pleasant. Later the girl will relax in a warm bath infused with herbs and rose petals, which should “cure” her, says Dona Rosa, though she warns a second visit might be necessary.

The girl’s elder brother muffles his laughter as he watches his poor sister endure the treatment, but he shouldn’t be so smug – five minutes later his torso is being “massaged” with nettles.

“They want him to have good energy because he’s just started school,” explains Adriana, translating his mother’s words. “He used to have nightmares when he was younger, but this cured him.”

Where, I ask, are the cigarettes? The Marlboro Reds. “We don’t use them,” explains Dona Rosa. “But the shamans do – they use smoke and they treat different illnesses.” Presumably, I offer, not lung cancer.

Like other healers, Dona Rosa doesn’t just treat patients; she diagnoses them. And to do this she uses a dead guinea pig, obviously.

“The cuy [guinea pig] is like an X-ray,” she explains. “I pass it all over the person’s body and then open it up.”

If the cuy has, say, a bad liver, Dona Rosa knows, allegedly, that the patient also has a bad liver and will treat them accordingly. “I also use an egg,” she says. “But it’s harder to read.”

Though her treatments don’t carry much scientific weight – and look somewhat cruel to westerners – indigenous communities in Ecuador, Bolivia and Peru have sworn by them for thousands of years. These Andean nations have a long-held belief that harmony with nature is the cornerstone of good health and that limpia is one way of restoring that equilibrium.

The amount of punters coming to Dona Rosa’s stall is testament to that, but despite the popularity of such treatments her trade could be a dying one.

“All the members of my family know how to do it, but they have different jobs,” she says, wistfully. “I’m not sure if my children will take over when I die.” 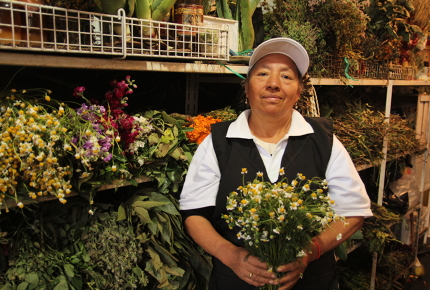 Unfortunately, the aphrodisiac soap didn’t work for Gavin, who stayed at Casa Gangotena where he remained quite resistible to women (and men). Located in Old Town Quito, the hotel can arrange limpia treatments for guests, starting at $40, as well as tours of the nearby San Francisco Market.

Keeping old traditions alive in Ecuador
In pictures: The Last Iceman of Ecuador