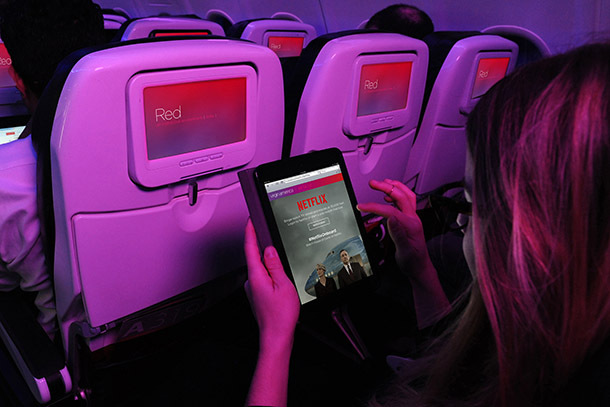 You can now binge watch all your favorite Netflix series on a long flight, or finally figure out what’s so great about that one show everyone in the office is talking about. Thanks to a new partnership between Virgin America and ViaSat, 10 of Virgin’s airbus A320 aircrafts now have a faster Wi-Fi connection, claiming that speeds are just as fast at 35,000 feet as they would be at home.

The catch? The Wi-Fi connection will only be free until March 2, 2016. The good news? You don’t need to have a Netflix subscription already—but you will need your own tablet or laptop. Passengers who are already members just need to login to their accounts; non-members will need to create a free trial account to access the platform.

If you ask me, that’s a no-brainer. Even if you decide against bringing your device or making an account, Virgin is currently streaming all seasons of House of Cards on its newly upgraded Red inflight entertainment platform (you could even be on the House of Cards-branded aircraft).

While being able to stream Netflix in-flight is great, the more exciting news is that there is now technology to make this possible. The new Wi-Fi comes from ViaSat’s satellite-based services, which claim to deliver a connection eight to 10 times faster than other in-flight Wi-Fi broadband-based services, which poorly support video streaming.

No word yet what the Wi-Fi fees will be after March, or how many other aircrafts they will eventually expand to. For now, I’m hoping they expand the availability of Netflix shows on their own in-flight entertainment platforms.

This isn’t the first entertainment-airline partnership, either. Amazon recently announced it now lets Prime members stream previously downloaded movies and TV shows offline. And, back in March, Amazon also announced a partnership with JetBlue to give Prime members free access to its «Fly-Fi Plus» Wi-Fi (also satellite-based), which can stream video, allowing users to stream Prime on a device in-flight.

Whether you’re more excited about being able to binge watch Bloodline or the new developments in onboard Wi-Fi, it seems like in-flight entertainment is taking a turn away from those back-of-the-chair TVs. If you’re a frequent flier, I would consider investing in a subscription based entertainment service and start bringing a tablet or computer with you, as it seems that faster Wi-Fi speeds will now cater to video streaming.