Домой Путешествия Amsterdam: A tour with the whores 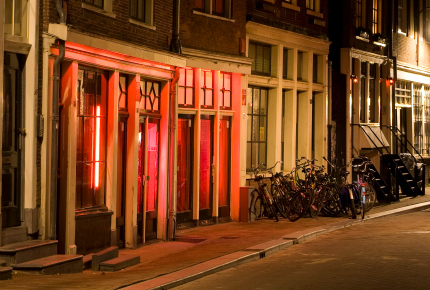 Two of Holland’s most famous hookers give Gavin Haines the ultimate introduction to Amsterdam’s red-light district.

Aptly, I meet the hookers on a street corner. They’re dressed identically: navy jeans, red leather overcoats and scarlet boots, with baby blue berets perched atop their wispy white hair. I flash them an awkward smile and their painted lips part to reveal pearly white teeth.

Martine and Louise Fokkens are identical twins and have the dubious distinction of being the most famous hookers in Holland. At 73 years old, they’re also probably the most experienced, having racked up a century in the trade between them. The self-styled ouwehoeren (‘old whores’) have reportedly pleasured some 355,000 men during that long career, which is greater than the population of Belize, though the girls claim they never kept a tally.

Today they have promised to show me a good time in Amsterdam’s red-light district, but first: money. They want some. Cue Elard Jan, who works with the Fokkens and interjects to explain the virtues of offering journalists a freebie. It will be good publicity, he tells them, or words to that effect. The girls acquiesce and we set off for their brothel.

Now I probably should mention at this point that as well as plying their trade in the world’s oldest profession, Martine and Louise work as tour guides. As the demands of prostitution become too much for their ageing bodies (Louise retired recently due to arthritis), they’ve been forced to diversify. Martine still sees clients, a couple of regulars, but she’s winding down.

“I don’t sit in the window anymore,” she says. “And I don’t always have sex [with clients]; sometimes we just drink tea and talk. There’s a lot of talking.” 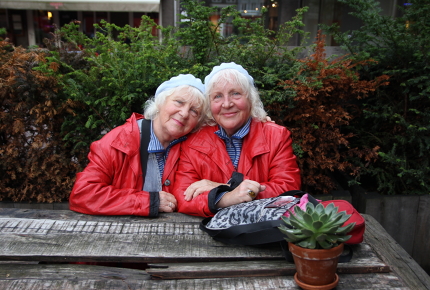 Under a bruising Dutch sky, we start our tour (what did you think I was doing here?), walking along Oudezijds Achterburgwal, one of Amsterdam’s oldest streets.

The conversation is lively, but disjointed: getting information out of the girls isn’t easy; they speak in unison, finishing each other’s sentences, often switching between Dutch and English. Elard occasionally interjects. It’s a nightmare to document.

I do, however, gather that Louise was first into the trade, forced to take up prostitution by her abusive husband. “He told me to go and work,” she says, candidly. “We had children to feed.”

Also looking for work, Martine took a job cleaning her sister’s brothel, but she didn’t clean for long.

“Men came by and mistook me for Louise,” she says. “When they realised we were twins they wanted both of us.”

So the girls started offering threesomes. Was that not a bit weird, having sex together, I ask. “No,” they say. “It was fun.”

We hang a right down Koestraat, a narrow, bike-lined street on the edge of the red-light district, stopping outside number 14.

“This was our first brothel,” announces Martine, proudly. “We were the first women to open our own brothel in Amsterdam.”

The girls linger outside the property wistfully. It’s a house nowadays, as many former brothels are, but further up the street I spot a lonely red light hanging above another door; the vestiges of a trade that has all but abandoned this street.

The girls tell me how they used to work for pimps.

“It wasn’t a bad thing to have a pimp,” says Martine. “A good pimp was like your manager: he took you for dinner and drove you around in his car. It was fun.”

But Louise and Martine also experienced bad pimps, whose violent episodes convinced them to go it alone and open their own brothel. Those pioneering days were the golden years, say the girls.

“It’s not the same, now,” laments Louise. “When we were in the windows we wore sexy clothes, but prostitutes today wear almost nothing. Most of them are from Eastern Europe.” 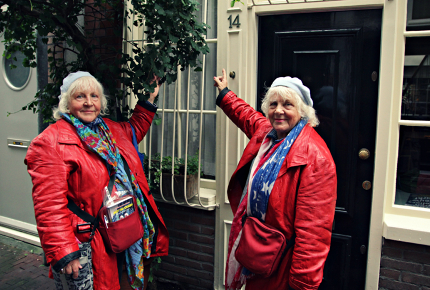 Our tour veers away from the red-light district to a nearby bookshop where the girls’ artwork happens to be on display. The part-time painters encourage me to take photographs of every piece.

It’s not my cup of tea, although there is one watercolour that piques my interest. It depicts male prostitutes in bondage (not the kinky kind) and is supposed to be a political statement lamenting society’s treatment of gigolos.

“Men don’t have the same rights,” says Louise, pointing to the shackled figures.

We exit the bookshop via the reference section where copies of the girls’ book, Meet the Fokkens, are stacked on shelves.

Meet the Fokkens is not well written; its clumsy anecdotes discard the rules of grammar like a used condom, but they do offer a curious insight into the lives of the hookers.

Rather than peeling back a curtain on the red-light district, the twins try to pull it off the rail; telling tales of masochist ministers, sadist businessmen and blokes who pretend to be donkeys during intercourse.

Some lines hit you like a sadist’s whip (“once a brown dick, always a brown dick”; “she was a robust black-haired woman from Belgium with a wonderful rack”; “unfortunately his willy almost collapsed”), but you can’t help but feel the twins gloss over the grittier side of prostitution, glamorise it almost.

I put this to them, but they stand by their assertions. “It was fun,” they maintain. So how would they react, I ask, if one of their daughters followed them into the profession?

There’s a pause. “We’d break her legs,” they say, before posing for one last photograph and bidding me farewell. 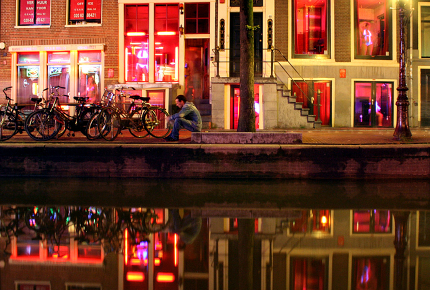 Amsterdam Red Light District Tour offers group tours with the Fokkens for €35, departing every Saturday and Sunday. Gavin went on an abridged version of the tour, which usually also includes a visit to magic mushroom shops, coffeeshops and a peepshow.