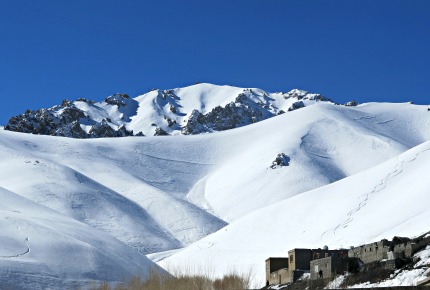 In the third of our strange skiing series, Ian J Lynch goes in search of the perfect slope in Bamiyan province, Afghanistan.

Afghanistan is in the newspapers, but never the travel pages. It’s surreal to step off a plane and feel safe.

The Foreign Office advise against all travel, and your mum pleads with you to stay home, but when that pull of powder tugs hard enough, suddenly you’re nestled between the Hindu Kush and Koh-e-Baba mountain ranges in central Afghanistan, looking for a route down.

Bamiyan is a paradisiacal Shangri-la. The towering mountains isolate it from the horrors that beset much of the country. The Hazara people are diligent in keeping their heartland peaceful and welcoming.

It’s a pink early morning when I head out into the mighty Hindu Kush Mountains, the sunrise giving the unblemished snow a red hue.

I follow my guide Sajjad through the snow to the beginnings of the Koh-e-Baba range, where 4,000m (13,120ft) of deserted, crisp powder awaits beneath our feet.

As we walk, two local children whizz past on homemade skis. They fall down the hills more than they carve but their laughs reverberate around the valley.

One wears a thin wool coat, the other just a well-worn football top. Both their boots are strapped to wooden planks with heavily knotted rope.

Sajjad, however, sports top-of-the-line gear from his sponsors.

“Inshallah [god willing], next winter I will train in Switzerland for the Olympics,” he shouts back to me in excellent English.

His sights, along with those of fellow guide, Alishah, are firmly set on competing at South Korea 2018. 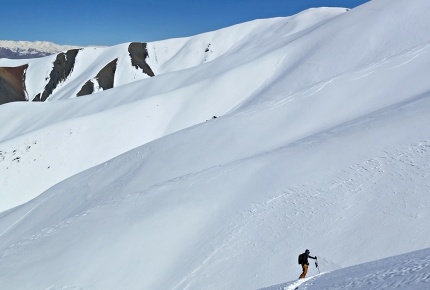 For Sajjad and Alishah, who provide guidance on these hills for intrepid tourists as well as an increasing number of locals, skiing is more than joy; it is a great opportunity.

Skiing as a sport is a new concept in Bamiyan. Before 2001, snow’s only value came in the spring when it melted and fed their crops. But since opening in 2011, Bamiyan’s ski lodge has hosted skiers from Scotland to New Zealand.

The vast majority of guests have likely never been to a country like Afghanistan before, so sitting on toshak mattresses back at the lodge, eating from steaming dishes laid out on a plastic tablecloth, I seized my opportunity to ask why they were holidaying here.

“To ski majestic mountains, why else?” exclaimed an old Frenchman, his white hair mangled from days matted under his ski helmet.

“What about you?” a female elementary school teacher from Boston asks, passing over a bowl of ashak (Afghan dumplings with lentils and yogurt) and qabuli (oily rice laced with carrots and raisins).

I wanted freedom. After sitting at a desk in Kabul for two months I was yearning for adventure. Pure, desolate snow-capped wilderness is special anywhere, but in a place that so few people get to see? It’s a new frontier.

Back on the mountain, Sajjad handed me a kabob as we rested atop the ridgeline overlooking the steep valley.

The 53m-tall (170ft) Buddha niches that had completely dwarfed me back at the base now looked like pinpricks. The two empty mountain caverns once housed a pair of 6th-century statues of Buddha.

Sajjad recalls the beautiful statues that once stood in the cliffs, before the Taliban demolished them during his childhood. I remember the Twin Towers falling on the television; Sajjad remembers the Buddha figures crumbling first-hand.

We strap on our skis and push off the precipice, hurtling down the massive open snowfields blanketing untouched peaks beneath a cloudless blue sky. I grin as I slalom behind Sajjad; no other tracks blemish the powder.

It’s reassuring to know that even in a country so ravaged by ongoing war, serenity still exists. And as I carve through the snow, the wind still rings out with the laughs of the two local boys. 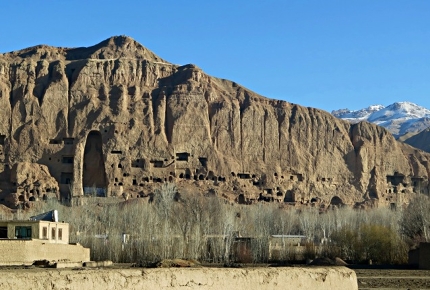 Getting there
The easiest way to plan a trip to Bamiyan is on an organised tour with Untamed Borders (tel: +44 1304 262 002; www.untamedborders.com). Their 10-day tour includes accommodation, breakfasts, guiding, ground transport and internal flights in Afghanistan for £1,700. More flexible packages can be arranged with the local Afghan tour company Rah-e-Abrisham (tel: +93 76 719 6434; or email: rahaeabrishamtour@gmail.com). Flights from London to Bamiyan start at £300 return, with a stop in Istanbul.

Additional costs
Ski rental: £27 per day. If you’re not using a tour package, ski guides start from £45 per day with ground transport costing the same.

Where to stay
Untamed Borders organises all accommodation for their tour, as does Rah-e-Abrisham. For those not packaging their trip as a tour, flexible accommodation can be arranged with Rah-e-Arbisham for £65 per night.