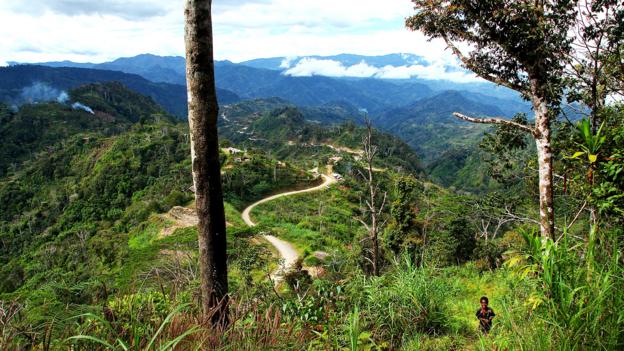 The Anga people live in Papua New Guinea’s Aseki District, a fringe highland region so detached from the modern world that even the regular passing of mist is considered an omen from the spirits. They’re also heirs to one of most bizarre rituals of the ancient world: the smoking of their ancestors’ corpses.

An extraordinary – and from an outsider’s point-of-view, grotesque – form of enshrinement, the smoked corpses of Aseki have captured the imagination of anthropologists, writers and filmmakers for more than 100 years. But few have been able to tell fact from fiction. 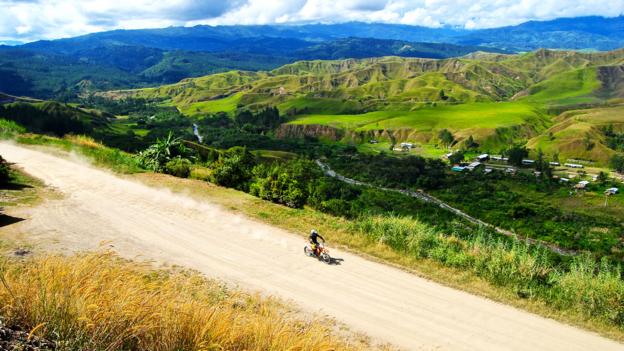 Mummies in a land of cannibalism
To find out when the practice began – and why the Anga began mummifying their dead in a land where cannibalism used to be the norm – I travelled to Lae, the second largest city in Papua New Guinea. There I met up with Malcolm Gauthier, a guide with off-road motorbike company Niugini Dirt.

Our journey took two days, with an overnight stopover at the former 1930s gold rush town of Bulolo. The further inland we rode, the worse the road got: a bone-jarring juxtaposition of washouts, muddy ruts and river crossings, some of which required dugout canoes to navigate.

When we reached Angapenga, a large village some 250km southwest of Lae, a group of children directed us to a strip of grass overlooking a saw-toothed valley. It’s one of dozens of sites in the Aseki District where smoked corpses can be found, though the exact location of most have been forgotten over time. The mummies of Angapenga are also the most accessible, located a short hike from the road. 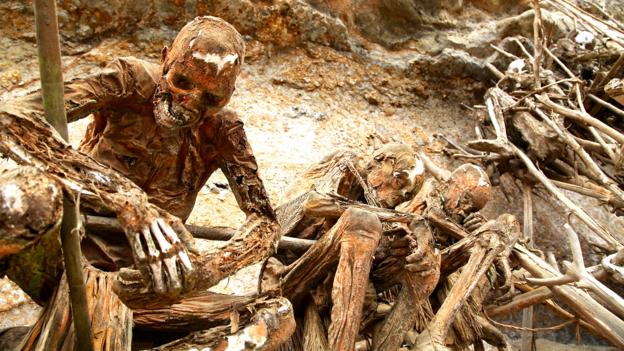 After we parked, we were approached by a man named Dickson, who said he was custodian of the site. Speaking in Tok Pisin – a colourful creole of German, English and indigenous Melanesian dialects – he demanded a princely access fee. Gauthier bargained him down to a figure both parties could live with, and we set off with dozens of children in tow on the final stage of our journey: a laborious half-hour climb through jungle riddled with stinging nettles and spider webs. The track was so steep and overgrown in parts that we found ourselves crawling on all fours. It then disappeared under the canopy and rounded a ridge where a clay wall rose steeply into the air. There, under a small indentation on the cliff, were the smoked corpses of Aseki.

‘More macabre than anything I had imagined’
The mummies were more macabre than anything I had imagined. Smeared with red clay, they were in various stages of decomposition, with parched sections of skin and muscle clinging to their skeletons. Some still had clumps of hair and full sets of nails curled in pensive positions. Their facial expressions were cut straight out of a Hollywood scream-fest, with full rows of teeth and eyeballs popping out of their skulls. One of the corpses, a female, had the smoked body of an infant pressed against her chest. 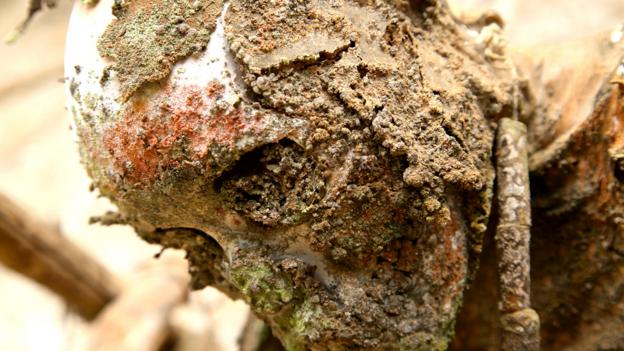 There were 14 corpses in total, arranged on bamboo scaffolding in life-like positions or curled up like foetuses inside large baskets. Four of the corpses had disintegrated into piles of bones, their skulls peeking out through broken bits of bamboo amid the dirt.

Getting close to the mummies proved to be difficult. There was no flat ground to stand on and I repeatedly lost my footing. When Gauthier came close to where the bodies lay, he slipped and grabbed hold of the scaffolding, nearly pulling the entire shrine into the jungle below.

One big storm or landslide and they could easily wash away.

I knew from a National Geographic documentary filmed at Koke, another village in Aseki, that the mummies are infrequently carried to villages for restorative work. In fact, Gauthier said he’d seen these mummies on display at the Morobe Show in Lae a decade ago. But I was dumbstruck at the idea of these delicate and priceless artefacts being put in the back of a flatbed truck and driven over 250km of broken roads. Even just sitting here, they were at risk of damage by clumsy tourists, tomb raiders and the elements. One big storm or landslide and they could easily wash away.

Stories lost in time and translation
Most of what’s known about the mummies is based on hearsay, exaggeration or flights of the imagination. Even the locals I spoke to – Dickson, a pastor named Loland and a schoolteacher named Nimas – seemed to offer different stories about the ritual’s past.

The first documented report on the smoked corpses was by British explorer Charles Higginson in 1907 – seven years prior to the start of WWI. Yet according to Dickson, the mummying practice began during WWI, when the Anga attacked the first group of missionaries to arrive in Aseki. His great-grandfather, one of the corpses we saw under the cliff, was shot dead by the missionaries in self-defence. 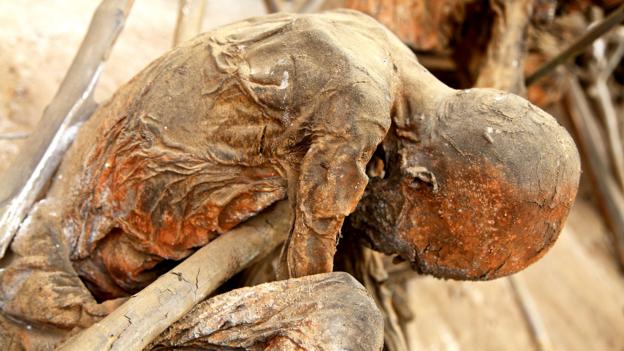 Dickson said the event sparked a series of payback killings that came to an end when the missionaries gifted the natives salt, with which they began embalming their dead. The practice only lasted for a generation, he added, since a second round of missionaries successfully converted the Anga to Christianity.

Loland and Nimas confirmed that the smoke corpse ritual ended in 1949, when missionaries took firm root in Aseki. But unlike Dickson, Loland and Nimas said mummification had been practiced by the Anga for centuries. The bodies were not cured using salt, they explained, but smoked over months in a “spirit haus”. They were then covered in red clay to maintain their structural integrity and placed in shrines in the jungle.


View image of The mysteries of the smoked corpses may never be solved (Credit: Credit: Ian Lloyd Neubauer)

Nimas also said that cannibalism was never practiced in this part of Papua New Guinea – a statement that contradicts Higginson’s 1907 description of the Anga as bloodthirsty savages who greedily lapped up the entrails of their own kin during the smoking process. But if that was the case, of course, then why didn’t the Anga didn’t make a meal of Higginson, a lone and defenceless foreigner living in their midst?

Some secrets, perhaps, are best kept with the dead.

Before departing, I asked Dickson one more question: was it true that embalmers drained the corpses’ body fat and used it as cooking oil during the embalming process, as is claimed by Higginson and nearly every report written on the mummies in the century that has elapsed?

Some secrets, perhaps, are best kept with the dead.