Домой Путешествия The way of the one-legged rowers 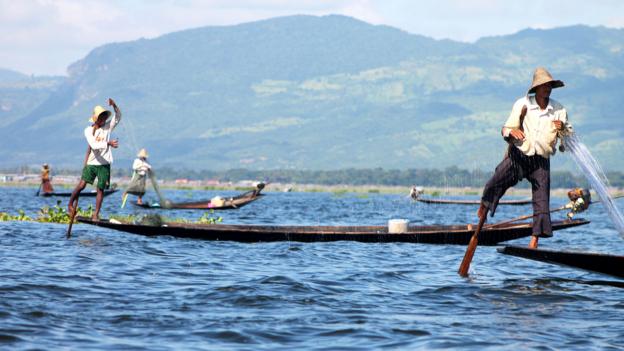 I was in a sky blue motorboat traversing Myanmar’s peaceful Inle Lake – the second largest in the country. Surrounded by mountains and clusters of colourful floating homes, I became mesmerised as the water swayed to the beat of the of the Intha fisherman, who expertly manoeuvred their tiny wooden boats by rowing with one leg.

With meditative expressions, a group of three fishermen deftly rowed by while standing upright. Each had one leg wrapped around a single oar, leaving their sunburned hands free to manipulate the conical fishing nets they cast over the glistening water. This skill, unique to Inle Lake, takes a high level of balance, agility and strength. The fisherman have to determine the right amount of pressure to put on their free leg, while their other leg steers, turns and uses the oar to slow the boat down. 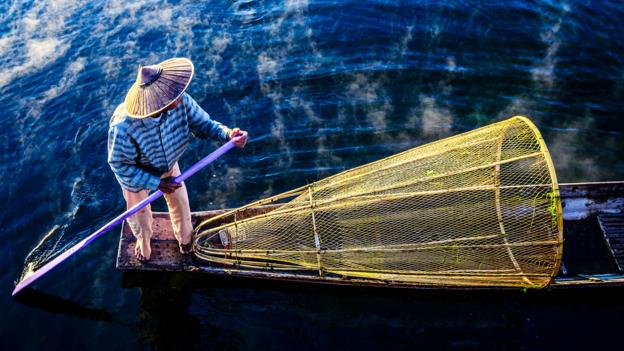 “I tried many times to practice that distinctive rowing style but I always fell down into water.”

“One might think it is easy. I did!” laughed Nyein Moe, my local guide during a trip with Trafalgar tours. “I tried many times to practice that distinctive rowing style but I always fell down into water.”

As we passed through the floating community, the fishermen used the small boats to transport themselves around. They went to the floating markets and to pay their neighbours a visit by rowing from house to house. Not one had fallen into the water. 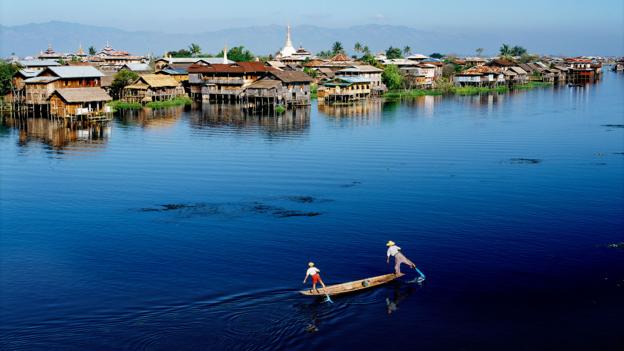 Around 200,000 people comprise Inle Lake’s Nyaung Shwe township, which includes various Myanmar ethnicities. However, the Intha or “lake people” make up the majority of the population. “The ‘In’ stands for lake and ‘tha’ means people in Burmese,” said Moe. The Intha community is self-sufficient when it comes to cultivating food and building materials.

“Their lives are dependent on this water.”

“Their lives are dependent on this water,” Moe explained, adding that they live on shore or in floating homes and flourish by fishing and cultivating arable rice paddies on the river’s delta. They also build floating gardens to grow produce, piling weeds and compost on long poles fixed to the lake floor.

In the distance, I spotted a group of fisherman gracefully using different equipment such as a saung, a conical net made from bamboo, and a vertical panel of netting called a htaung pite to catch prized fish such as ngape, tilapia, featherbacks, snakehead and Inle carp. To attract the fish, they also used a nga myar than, a type of rod and line with a barbed hook that’s usually baited with small shrimp. These fishermen learn these rowing and fishing skills as children and help provide for their families by selling the fish at the lake’s markets. 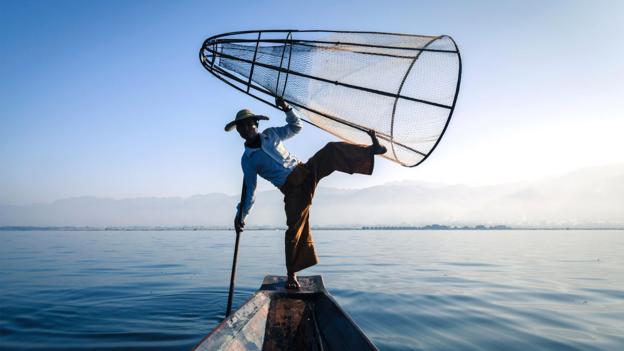 While believed to date back to the 12th Century, the exact origins of this one-legged rowing practice are still a mystery. However, as I witnessed this spectacular skill in person, I realized that it has likely survived for hundreds of generations because of its distinct advantages. The upright position allowed fisherman to see across the lake and spot dense hyacinth weeds just below the surface, where fish could be hiding. The fishermen were also able to keep close watch on bursts of bubbles created by shoals of fish. Ingenious, indeed.

BBC’s Travel Show sent Rajan Datar to get a first-hand look at the one-legged rowers and the floating gardens of Inle Lake. The Travel Show brings you the latest insider travel news, a wealth of destinations, amazing experiences and features and practical hints, tips and advice for your holidays.