Домой Путешествия Wrocław: Through the eyes of an artist 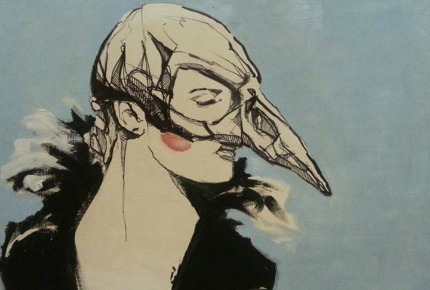 Artists don’t see cities the same way we mere mortals do, so Anita Isalska waltzed around Poland’s Wrocław with painter Katarzyna Śmigielska for a unique take on one of the European Capitals of Culture for 2016.

“Everybody can draw and paint,” muses Katarzyna Śmigielska, leading me along Wrocław’s cobbled streets. “The process is important, not [the] final result.”

To the dilettante, Wrocław isn’t a complete masterpiece. Certainly, the pastel-coloured baroque buildings and gothic spires rival Budapest, and its laneways conjure the romance of Montmartre, but only an artist can truly decode its rich canvas.

Take the patrons of Kalambur, one of Katarzyna’s favourite café-bars. Through the unfurling coffee steam of this former playhouse, animated conversations and rustling notebooks form a scene typical to Wrocław’s artistic havens. But to Katarzyna, something more mysterious is unfolding.

“Our faces, our poses can be like human theatre,” says Katarzyna, a local artist who finds inspiration in Wrocław and its inhabitants. 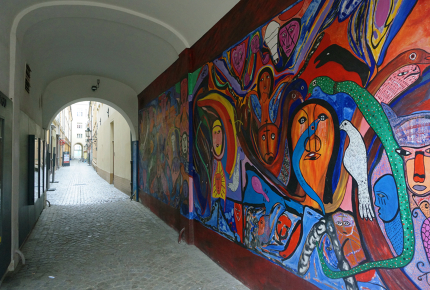 Katarzyna’s designs and paintings are sensitive, brooding portraits of women who catch her attention around the city. Seen through her eyes, even the most ordinary city facets take on an air of intrigue.

The city’s office workers might consider trams an unremarkable part of the urban landscape, but for Katarzyna, the passengers reflect her mood. “When I’m happy I see lots of colourfully dressed women, with some stars in their eyes; when I’m sad I see faces with mystery.”

For a city in a near-constant state of flux, it’s apt that Katarzyna finds most of her inspiration aboard a rattling public transport system. During the 19th century, Wrocław (then Breslau, under the German Empire) was a centre for architecture and opera, where German- and Polish-speaking artists flourished.

Creative life dwindled during the two World Wars, along with the city’s Polish population. The majority of the Old Town’s architecture was then flattened during 1945’s brutal Siege of Breslau.

Post-war Wrocław became part of Poland, with traces of German culture expunged. In a city flattened and rebuilt from a blank canvas more than once, painting landscapes can be deceiving.

“I started with landscapes,” Katarzyna recalls, “but I felt that I needed to paint people. Their look is connected with some emotions or feelings inside them — and illustrate feelings and emotions which I have inside me.”

The streets of the Jewish district, especially Włodkowica road, are dotted with vintage-themed bars and cafés where sketchbooks are essential accompaniments to a cappuccino. Tonight’s weather is emptying the neighbourhood of students and art lovers, but even their hurried disarray has charm through Katarzyna’s eyes.

“Yesterday there was a very rainy day,” recalls Katarzyna. “‘I saw some incredible women in raincoats and hoods, with wet noses, wet ends of their hair. Really amazing how many different beautiful women are on the street.” 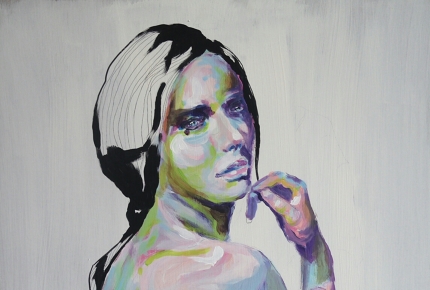 After the war, Wrocław’s treasured gothic and baroque buildings were faithfully restored from the rubble. But Communist rule brought further artistic setbacks, including the closure of the Racławice Panorama, a 114m-long (374ft) masterpiece.

Wrocław saw off these challenges with panache. Anti-establishment protests in the 1980s, just part of the groundswell that eventually ousted Communist rule, made gnomes an emblem of subversion and peaceful objection. Hundreds of gnome statues remain as reminders that creativity conquers all.

In Katarzyna’s lifetime, Wrocław’s greatest artistic revival has taken place in the north of the city, the Nadodrze neighbourhood.

“There are some damaged buildings where [now] there are murals,” says Katarzyna.

Nadodrze remains ramshackle, with eroded art deco facades and dingy housing blocks. But the gradual transformation of this once-insalubrious neighbourhood seems a work of art in itself. 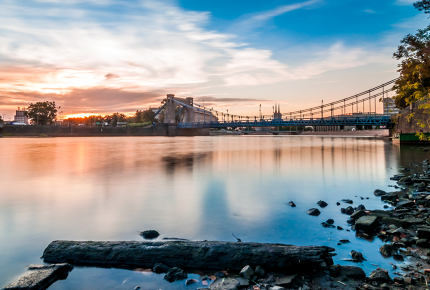 The bridges linking Nadodrze to the rest of the city bring to mind an easterly Venice. But Wrocław’s bridges are loaded symbols of a recent and painful process of renewal. The River Odra burst its banks in 1997, unleashing a devastating flood. It was the worst peacetime disaster in Wrocław’s history.

Away at the time, Katarzyna returned to an altered city.

“People lost everything,” she shakes her head. “When I came here, everything had changed.”

The flooding affected nearly a third of the city and 150,000 of its citizens. Parts of Wrocław were plunged under 3m (10ft) of water. Once again, Wrocław was forced to recreate itself.

Some heroes of the flood are remembered for protecting cultural treasures, forming human chains to haul precious books out of the university library.

“There is a sculpture on the other bridge of the flood, [showing] a girl with books,” says Katarzyna, extending her hand towards Uniwersytecki Bridge. Despite tumultuous history, renewal remains the prevailing motif.

One of the most beautiful reinventions is Ruska Street’s graveyard of illuminated city signs, now transformed into the Neon Side Gallery.

“You can see all the old neons of Wrocław,” says Katarzyna, her face bathed in magenta light as we enter this industrial courtyard. Surrounded by bare brick walls, we’re in no classic art gallery — but the effect is radiant. 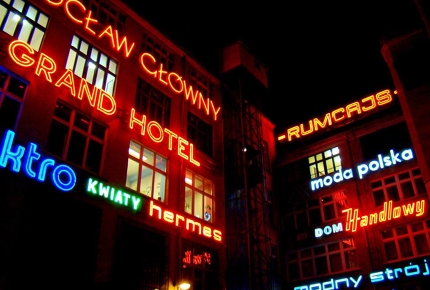 Their meticulous curation in this imperfect space seems to encapsulate Katarzyna’s belief that the creative process, rather than its result, is what breathes life into a piece of art. Awash in all this ethereal light, it’s easy to fall under the city’s spell.

For Katarzyna, Wrocław’s otherworldly qualities are clear. The city bestows fateful chances, hinting at a unity beneath the randomness and urban grit. One such divine intervention occurred when Katarzyna exhibited a portrait inspired by the sight of an unknown woman.

“On the opening of the exhibition, one young woman came to me and asked if I could sell her that portrait,” Katarzyna recalls. “She saw herself on the wall!”

Despite no knowledge of Katarzyna’s work (or indeed that she was its subject) the woman had arrived in the flesh, to be startled by her own portrait.

“She was my inspiration, and now she is one of my memories,” reflects Katarzyna.

If there’s serendipity to be found, it’s present in this chameleon city of artists and art lovers. As Katarzyna puts it: “Everything happens in our mysterious city.” 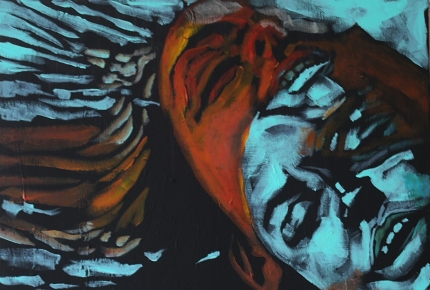 Getting there
Direct Ryanair and Wizz Air flights reach Wrocław from London and Paris. Wrocław also connects to Dresden (3-4 hours) and Prague (5 hours 30 minutes) by train.

Where to stay
With its elegant high ceilings, lavish breakfasts and cosy furnishings, Hotel Patio is walking distance from the main square and Jewish district.