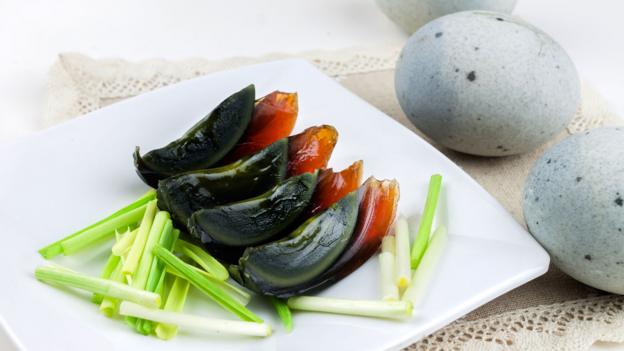 Hundreds of years ago, a savoury idea – called the century egg – was hatched in rural China. As the story goes, a farmer found naturally preserved duck eggs in a muddy pool of water and slaked lime (a type of calcium hydroxide). After surviving a tasting, he set out to replicate them manually, resulting in a delicacy that would endure for centuries as a comfort food in Hong Kong, China and parts of Southeast Asia.

Though details of the century egg’s discovery are undocumented, scientists estimate that it dates back more than 500 years to the Ming Dynasty. And aside from some techniques used for large-scale production today, the egg preservation process has remained relatively unchanged.

To make the eggs, a vat is typically filled with a combination of strong black tea, lime, salt and freshly burned wood ashes, and is left to cool overnight. The next day, duck, quail or chicken eggs are added to the mixture, and they soak anywhere from seven weeks to five months – not for a century as the name implies. 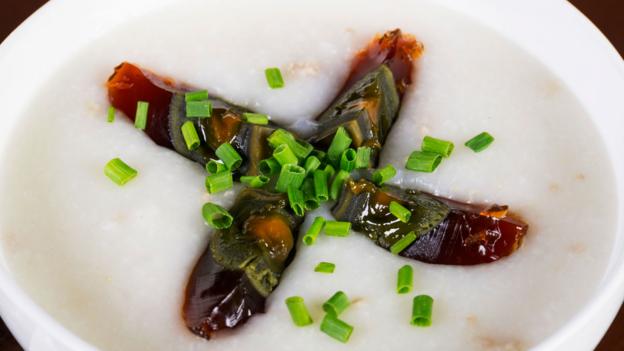 The century egg also goes by many other names, such as hundred-year egg, thousand-year egg or millennium egg. But no matter what it’s called, this common snack – readily available in grocery stores, at Chinese restaurants and in humble congee shops –  is a bit of an acquired taste, especially for travellers who group it with other Asian foods such as chicken feet or snake soup.

Getting beyond the egg’s appearance is the first challenge

Getting beyond the egg’s appearance is the first challenge. Instead of being white with bright orange yolks, these jelly-like delicacies take on a less appetizing dark brown and swampy green hue. There’s also a pungent ammonia-like odour to contend with, which has earned the snack yet another nickname: the “horse urine egg”. Appearances side, many children grow up eating this dish and learn to love the taste. 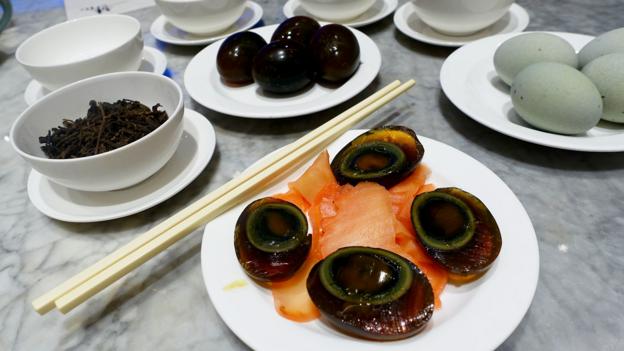 “I remember my father showing me a century egg, and my first reaction was that it smelled bad,” said CL Chan, a 55-year-old Hong Kong resident. “Gradually, I overcame that aversion and started to think of it as this nice thing. Whenever I got toothaches, my mother would boil me congee [rice porridge] with century eggs, coriander and lean pork. Eating that congee felt very soothing.”

While century eggs were made by farmers and villagers for hundreds of years, they started appearing on menus in Hong Kong when a handful of renowned Chinese chefs fled to the city in the 1940s during the Chinese Civil War and brought regional dishes with them.

It was during this time that one of Hong Kong’s most famous restaurants emerged. Renowned for its roasted goose, Yung Kee Restaurant also specialises in century eggs – typically served as a starter on a thick bed of bright pink ginger. (While the restaurant remains open, its future is uncertain as family members feud over it in court.) 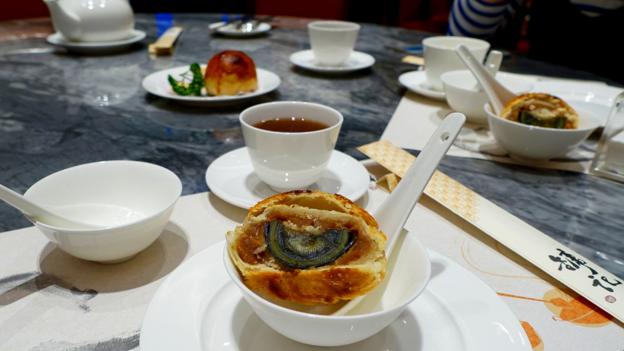 “Sometimes we have foreign travellers who look at [the egg] and get a little scared because it looks dark, ugly and all gooey and green,” said Carrel Kam, director of Yung Kee Restaurant and grandson of the founder Kam Shui Fai. “But it’s psychological – just like the idea of blue cheese. The smell is terrible but the taste is good.”

An ideal century egg has a proportionally large egg yolk, still greenish-yellow, runny and surrounded by concentric rings of brown, green and navy blue. The colours indicate the different stages of transformation – and the bigger and runnier the yolk, the better.

“We use the slower, traditional process, rather than trying to increase the speed of production by adding chemicals,” said Kam. “Making the perfect century egg is a matter of time – it’s a natural process.” 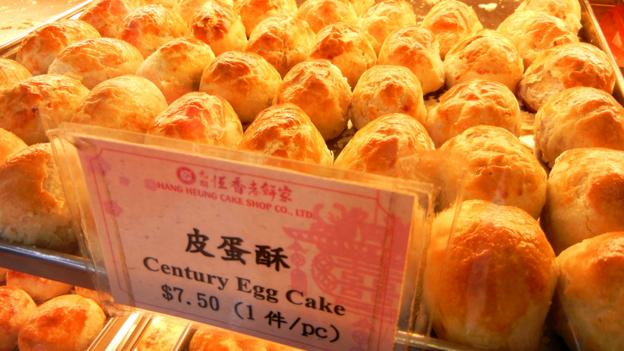 View image of Underneath the flaky crust, the black and green century egg is revealed (Credit: Credit: Kate Springer)

Because of the unpleasant odour, the taste is then totally unexpected. The egg is surprisingly creamy, velvety and succulent. When eaten with the slices of the pink ginger, the sweet and spicy flavour adds another element to the dish that refreshes the palate between bites.

The egg is surprisingly creamy, velvety and succulent.

Century eggs are eaten throughout the day – with breakfast, for dinner or as a snack or appetiser – and oenophiles are adamant that they pair beautifully with full-bodied Bordeaux wine or bubbly champagne. The eggs are also baked into pastries. Opened in 1920 as a dim sum restaurant, Hang Hueng has garnered a following for their version of the eggs, wrapped in a golden-brown crust. 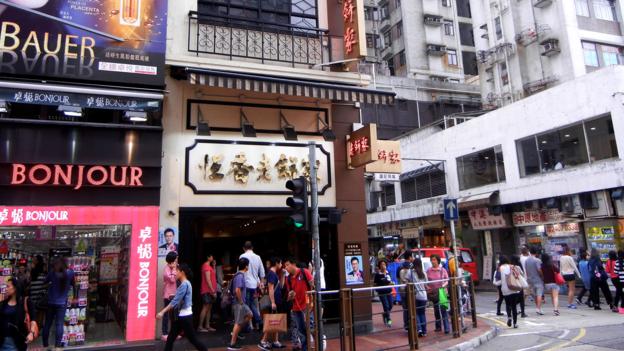 The relatively simple recipe – using a century egg, pickled ginger, puff pastry dough and bean paste – has been the same for as long as Hang Hueng has been in business, with each sifu, a skilled tutor or worker, passing down the techniques from generation to generation. The result is a crispy and buttery pastry shell with a soft, flavourful egg inside. The most critical part of the process is choosing the right egg, one that’s not too hard or too soft.

While the century egg draws a following from older generations and curious travellers, the eggs have fallen out of favour with the younger set who are weary of China’s preserved and fermented foods. 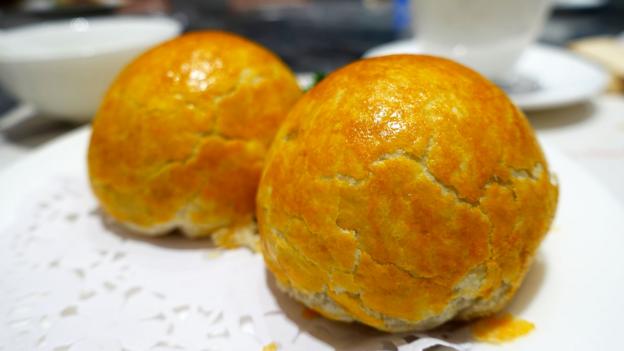 View image of Customers flock to the The Hang Heung shop, famous for their take on the century egg (Credit: Credit: Chan Sin Yan)

“The times are changing, and the young generation is showing less and less interest in these traditional foods,” said Kazu Leung, executive manager of Hang Heung’s cake shop. “From our experience, we have learned that these traditional Chinese pastries hold a special place for the post-70s and post-80s generation who had fewer snack options growing up.”

Although the future of these delicacies is somewhat uncertain, it’s likely they’ll be around for many more centuries. The humble snacks are ubiquitous — from dim sum restaurants to pastry shops – and chefs throughout Hong Kong are still preserving this nostalgic bite of culinary heritage. As Leung says: “We do not want to disappoint people who come to us for a taste of their childhood.”