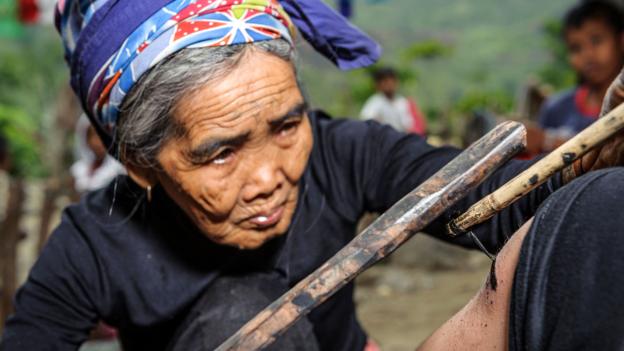 An old woman, with tribal tattoos covering her arms and chest, tapped an ink-soaked thorn into my arm. We were sitting on the dirt-packed floor of her home, high in the Philippines’ Cordillera mountains, where she has been tattooing headhunters and women going through rites of passage for more than 70 years. Apo Whang-Odis considered the last tattoo artist in the Kalinga region,carrying on the 1,000-year tradition of batok. 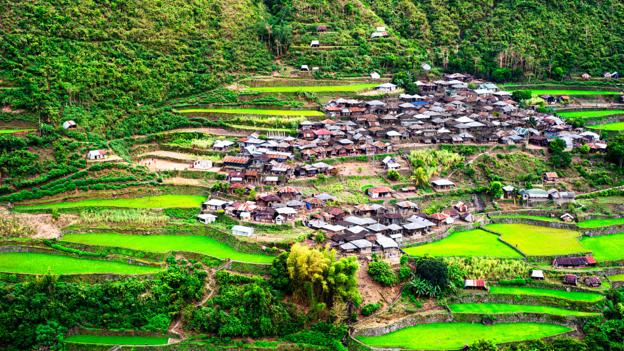 View image of Whang-Od is the last traditional tattoo artist, unless her apprentice masters the art (Credit: Credit: Jorge Fernandez/Alamy)

The deeply wrinkled, beautiful elder looked up from her playful demo on my skin, and smiled as if to say, “You want one?” I nervously giggled and moved my arm away. Little did I know that three years later, Whang-Od would be nominated for the Philippines National Living Treasures Award, prompting a shift in the ancient art’s future.

Seventeen hours north of Manila, the Kalinga region is so fiercely independent that throughout 400 years of the Philippines’ foreign occupation – by Spain, Britain, the US and Japan – it successfully fought off any outside rule by headhunting. We visited three years ago because a friend introduced us to Remy Erminger, a Kalinga native who invited my husband and I on a trek to her village of Buscalan, a tribal community tucked in the lush Cordillera rice terraces. 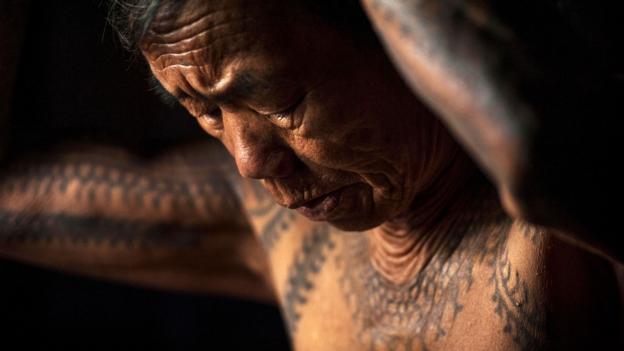 Without a second thought, we started the all-day journey up semi-paved switchbacks and landslide-prone mountains in a 4×4 truck, which was packed with 30 locals – and one 20-something Euro­­pean woman, wearing dreads and a 60-litre backpack. “I’m going to get a tattoo from Whang-Od, the last Kalinga tattoo artist,” she said.

Tattoos are one of our greatest treasures; no one can take them away from us when we die.

Every Kalinga village used to have a mambabatok (a master tattooist) to honour and usher in life’s milestones. When women would become eligible for marriage, they would adorn their bodies with tattoos to attract suitors. When headhunters prepared for battle, an inked centipede would be their talisman, or when they returned with a kill, an eagle would commemorate their victory. “Tattoos are one of our greatest treasures,” Whang-Od said. “Unlike material things, no one can take them away from us when we die.”

Among modern-day Kalingas, the thick black ink and tribal designs are often perceived as passéin light of newer vibrant inks and refined technologies – Erminger herself has a machine-made drawing sporting her boyfriend’s name. There is no longer a demand for batok, a technique where a razor-sharp thorn is fastened to a stick, dipped in soot-based ink, rapidly tapped into the skin with a bamboo mallet and guided by a hand-made stencil.

Mambabatoks can only teach within their bloodline, so without any children, Whang-Od would have been the last mambabatok in the Kalinga province. But a decade ago, she began training her great niece, Grace Palicias, to be her apprentice. At the tender age of 10, Palicias was put into intense training to learn the archive of ancient designs and the necessary coordination and finesse to tattoo at 100 taps per minute. Most importantly, Whang-Od explained: “For Grace to become a good mambabatok, she will need passion and patience. 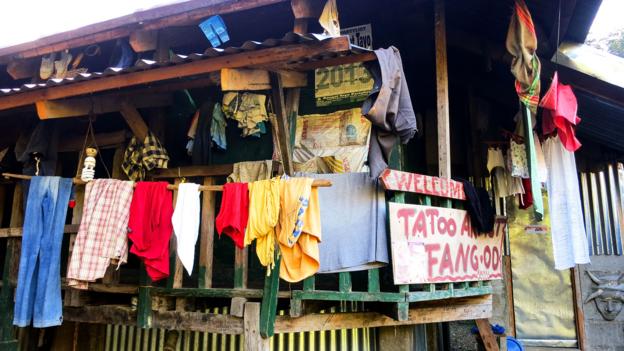 We arrived at Buscalan and followed Erminger through the maze of stilted and thatched roof houses until we reached her family’s home. After a rough night’s sleep on a bamboo mat, we rose early to explore the village and encountered a pair of teenage sisters who invited us for breakfast, and took us to Whang-Od’s house soon after. The European backpacker was there, looking a bit nervous as Whang-Od sharpened the thorns and Palicias blended the black ink in a coconut shell. The woman was one of the few travellers to make the tattoo pilgrimage to Buscalan before 2013, when the Discovery Channel’s Tattoo Hunter, Dr Lars Krutak, featured Whang-Od in Warrior Tattoos of the Kalinga.

After the episode, word quickly spread about Buscalan and the opportunity to get inked by the last mambabatok. Travellers, tattoo enthusiasts, journalists and proud Filipinos flocked to the village and returned with stories of the great Whang-Od. The buzz reached its pinnacle in fall 2015, when a social media campaign to honour the artist attracted so much attention, it prompted Filipino senator Miriam Defensor Santiago to nominate Whang-Od for the National Living Treasures Award.

Thrilled to hear that Whang-od was receiving such recognition for her life’s work – but also nervous about what the attention would mean for Buscalan – I reached out to Erminger. “It’s crazy,” she said. “There were over 50 people lined up for tattoos yesterday!” She also told me of tourists creating excessive noise, litter, and even graffiti. “I don’t like it,” Erminger explained in a wary voice.

Buscalan doesn’t have the needed accommodations and food supplies, let alone sewage system, to handle this influx of people. Local reports say that village kids are becoming more aggressive, asking for candy and money in exchange for directions, while adults are retreating to the privacy of their homes. This is a region whose legacy was made by warding off outsiders – but with a deluge of travellers coming to honour the Kalingas deepest cultural expression, it’s obliged to let them in.

“I want people to know that the traditional tattoo is not just a graphic – every design represents something,” said Whang-Od speaking to Erminger on my behalf. “I want people to have tattoos not just to be in fashion, but because the design you choose means something about you.” 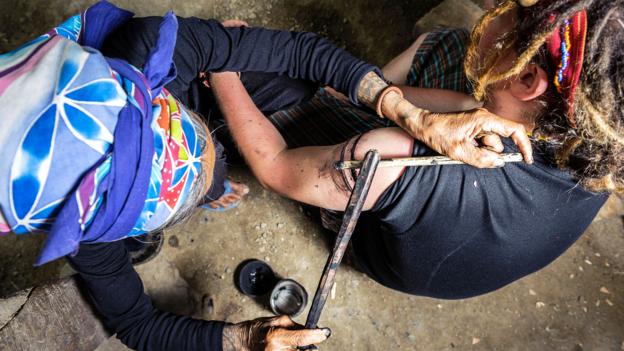 No longer earned as a rite of passage, batok seems to have changed more in the last year than it has in the last thousand. But for an art that was on the verge of extinction, evolution could be its salvation.

The influx of people and physical demands on now 97-year-old Whang-Od has allowed Palicias to hone her technique and take the lead on many designs. “I want to continue the Kalinga traditional tattoo,” she said. “When Whang-Od passes on, I am here to take care of our Kalinga traditions, to keep them remaining for the people and to not forget our culture.”

The future of Kalinga tattooing is uncertain, but it will not die with Whang-Od. The ancient art is in high demand, and young Palicias – now well-respected in the international tattooing community – is poised to carry its legacy. Whang-Od will no longer be mourned as the last mambabatok. Perhaps, she’ll live on as the mother of a new generation of Kalinga tattoo.


View image of The soot-soaked thorn pierces the arm of a tourist (Credit: Credit: Jorge Fernandez/Alamy)