Домой Путешествия War and pith: Surviving the Battle of the Oranges | World Travel... 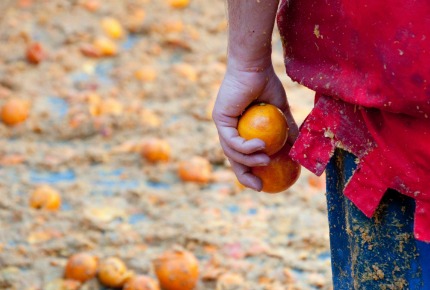 In this pithy piece, Karl Webster squeezes the juicy gossip from Italy’s Battle of the Oranges, so citrus yourself down and take in a slice of the action.

A roar went up as I took my first hit. It smacked into my left eye with a thud, dislodging a contact lens.

It was only the first of three afternoons of frenzied fruit-based carnage known as the Battle of the Oranges, and already I was half blind. This good-natured, but undeniably vicious affair made La Tomatina in Spain look like a pillow fight.

The battle marks the culmination of carnival week in the picturesque town of Ivrea, northwest Italy, where over 50 horse-drawn carriages, each containing up to 12 masked tyrants, charge through the town’s narrow streets and main squares. Each engages in a frantic, sticky fight with nine squadrons of fruit-pelting peasants.

Although the battle itself only dates back to 1947, its roots reach as far back as the 12th century when a local ruler, Count Ranieri of Biandrate, attempted to rape a young woman on her wedding night, as per his legal right under the rule of droit du seigneur (right of the Lord).

However the young woman in question, Violetta, had other ideas and smuggled a knife into the tyrant’s bedchambers. A short while later she held his severed head aloft on the palace balcony, sparking the revolution that is celebrated and re-enacted every year — with oranges.

Why oranges figure is tougher to pin down. According to former carnival committee member, Franco Mei, there are two possibilities: either the oranges stem from a 19th-century courtship ritual, or they represent the beans that nobles used to throw to peasants, who’d throw them away, insulted by such a paltry offering.

“Although it’s difficult for people to agree exactly how the use of oranges evolved,” Franco said, “what is certain is that today the battle represents an uprising, a fight for freedom.” 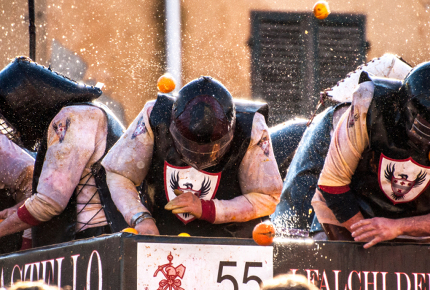 At the end of day one, the walking wounded are in plentiful supply, smiling proudly with bloody noses and black eyes, guzzling endless supplies of mulled wine. The protective netting that covers the buildings is a mess of pith, peel and pips.

Approaching sundown on the third day, the streets are awash with rivers of blood orange, as a horse keels over in the road. Exhausted, it looks unlikely to survive. People gather around its snorting body, weeping openly, mourning this unfortunate casualty of war.

It feels an age from the beginning of Carnival week, Giovedì Grasso (Fat Thursday), which occurs on the last Thursday before Lent. Then, Ivrea was in full fancy dress. Clowns, giant bees and jovial Christs danced to tacky music alongside rancid Berlusconis.

They feasted on cod, polenta, tripe and beans, all washed down with rivers of Prosecco and hot wine at the nine marquees scattered throughout the town, each representing a different peasant squadron.

The squadrons sported names like the Panthers, the Scorpions, the Devils and, most succinctly, Death. On the final afternoon, I took a bucket of ammunition and joined the Death squadron ranks. I was thankful for the brevity of my total immersion because right there, in the midst of the marmalade mêlée, it was complete madness.

The tyrants’ missiles came thick, fast and hard from just a foot above. Running alongside the carriage, the trick was to protect your face, pelt accurately and stay upright in the slippery sludge. Achieving all three, however, was impossible. Frankly, it took the pith. 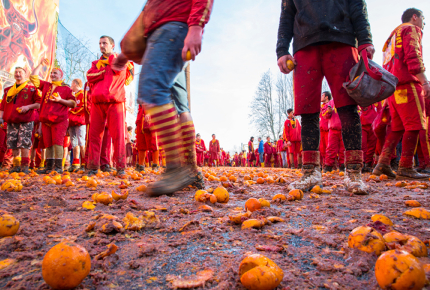 Getting there
The nearest airport is Turin International, with regular buses and trains direct to Ivrea. Hourly trains also leave from Milan, taking just over two hours.

Event information
This year, La Battaglia delle Arance (the Battle of the Oranges) takes place on the 7-9 February, but Ivrea is in a state of almost constant celebration from the 4 February.

Where to stay
Central accommodation is booked up months in advance, but there may still be some availability out of town. Day trips from nearby Turin, which is less than an hour away by train, are a good alternative.