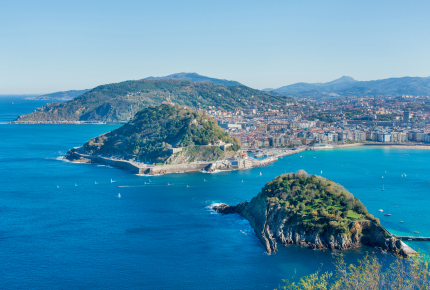 From surfboards to cemeteries, via a nibble on a pintxos or three, we select the best activities to sample in San Sebastián, the European Capital of Culture 2016.

With its fiery political history and underlying tension regarding regional sovereignty, San Sebastián (or Donostia to use its Basque name) is a brave candidate for Capital of Culture 2016; a title it shares with Wroclaw, Poland

Though small, the Basque coastal town in northern Spain squeezes in a plethora of riches to keep visitors entertained. Its crescent coastline attracts loungers and surfers, while foodies pilgrimage to its gastronomic old quarter.

With hundreds of cultural events taking place this year, it can be hard to know where to begin. Fortunately, we’ve selected the top 10 unmissable San Sebastián activities to help you on your way.

Along with food and wine, the outdoors plays a huge role in Basque life. Misty peaks dotted with weathered farmsteads surround the city, and it’s a common sight to see locals packing up their cars to spend a weekend scaling a summit.

Those with a proclivity for plodding should amble to the top of Monte Urgull (123m/404ft) where a 12 metre-high (39ft) sculpture of Jesus Christ overlooks the city. Experienced ramblers should head to the iconic crucifix-strewn summit of Hernio (1,075m/3,527ft), a more challenging peak and a popular pilgrimage point in September. 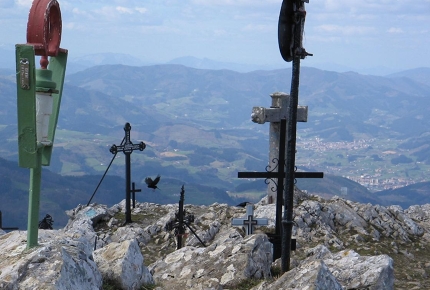 2) Pinch a pintxos or three…

The perfect symbol of the sociable and indulgent nature of the Basque people, Pintxos (a bite-sized snack consumed during drinking sessions) has become synonymous with easy-going San Sebastián.

As the sun begins to dip behind Monte Igueldo, the tiny taverns that line the snaking alleyways of the city’s old quarter fill their bars with miniature portions of fish and meats, often spread on small slabs of crusty bread. Jolly locals wander in for a beer and a bite then wobble off to find their next haunt. Fish lovers will adore the anchovies at Bar Txepetxa (Calle de la Pescadería, 5), while sweet-toothed punters should sample La Viña’s (Calle del Treinta y Uno de Agosto, 3) famous baked cheesecake.

While the swells don’t measure up to those that pound the shores of cross-boarder cousin Biarritz, San Sebastián has a healthy and flourishing surf scene spanning across its two crescent-shaped shores.

The beauteous La Concha beach (named after its iconic shell-like shape) is the ideal setting for complete novices, with gentle swells favoured by the city’s paddle boarding crowd.

Across the Urumea River, the Sagüés district is the crest of the city’s main surf scene, with bars and cafes around Zurriola Beach continuously crammed with olive-skinned locals with surfboard in tow. Here, lessons are offered to visitors by numerous schools, including Pukas Surf Eskola (www.pukassurf.com), the longest running surf school in Spain. 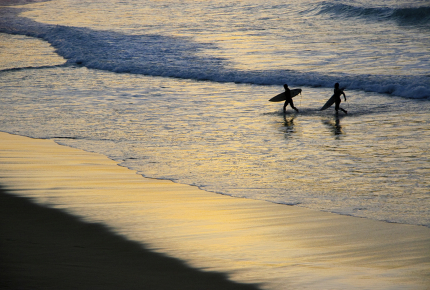 One of the standout events of San Sebastián chocked 2016 schedule will be the immersive open-air performance of Shakespeare’s A Midsummer Night’s Dream. Coinciding with the 400th anniversary of the Bard’s death, the play will run for four weeks from the 21 June.

The city’s atmospheric Cristina Enea Park provides a fitting stand-in for the play’s fairy woodland setting, where audiences chase the action through the trunks of ginkgo and redwood trees as peacocks prowl nearby. The play will incorporate a banquet and be performed in modern English, Spanish and Basque. 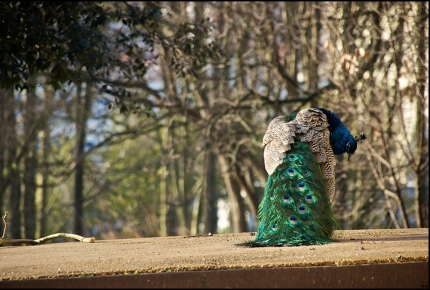 5) Catch a game of Basque pelota…

Capturing the imagination of great minds, including Paul Newman and Ernest Hemingway, Basque pelota is perhaps the most famous and visually spectacular of the traditional Basque sports.

The game has many varieties but loosely resembles an old fashioned form of squash. Initially played on the exterior walls of churches, you’re likely to find a simple version of hand pelota (where the hand is used to hit the ball) being played on makeshift frontons (courts) throughout San Sebastián.

For a real spectacle, head to the Galarreta Fronton in Hernani, where the pros bestowed with xisteras (gloves that extend into a long pointed curved basket) do battle in front of bellowing sell out crowds. 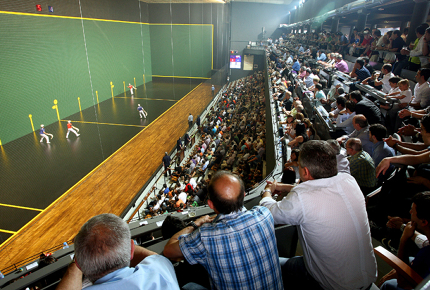 6) Scout out some new street art…

Specially commissioned for this year’s festivities, the city and its surrounds have benefited from a lick of paint courtesy of acclaimed local and foreign street artists.

The Walls That Talk project sees artists teaming up with local communities to create large murals that depict images of coexistence painted on large walls, traditionally a symbol of division and separation. Don’t miss Harsha’s Fisher of Dreams in Roman Irigoyen Park or Hormachic’s comment on immigration in the neighbouring town of Errenteria. 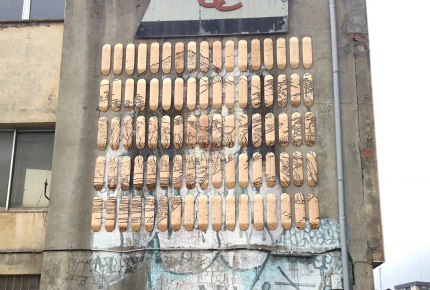 7) Experience a proper Basque booze up…

If you envisaged a night out in the rural regions of the Basque country as a civil affair comparing notes on the acidity of wine, then a night in a sagardotegis (traditional cider house) may shock you.

In a centuries-old tradition, from January until late April (the cider season) locals gather at large, barn-like structures to sit round communal tables and indulge on a feast of steak and cod.

When the txotx is called, everyone heads towards one of the hefty wooden cider barrels and attempt to fill their glasses from the spurting jet of cloudy liquid. A piss up with cultural integrity? Cheers to that. 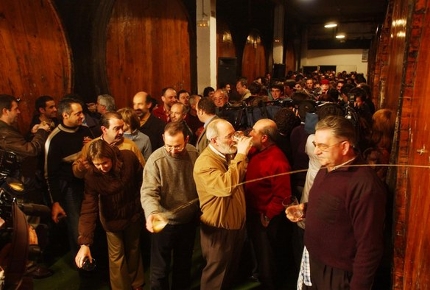 8) Give the galleries a go…

The beautiful San Telmo Museoa (Plaza Zuloaga, 1) is the first port of call for aesthetes, which is hosting a special Basque art constellation to coincide with the Capital of Culture celebrations.

The museum itself is an old Dominican convent from the mid-16th century, with grand chambers and arresting wall murals. Other worthy art galleries in the city include the modern Arteko Galeria (Calle de Iparraguirre, 4) and Enelestudio art gallery (Zaragoza Plaza, 3), which also houses a functioning studio. 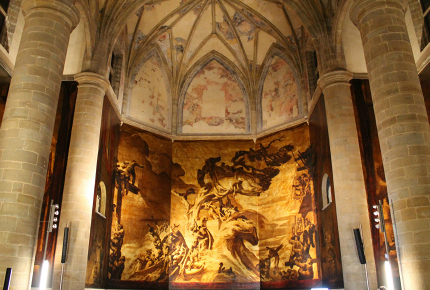 9) Roam around an abandoned graveyard…

Weathered, overgrown and forgotten, the English Cemetery doesn’t attract the click of many camera phones. However, hidden away around the shaded side of Monte Urgull public park, its eerie, empty grounds strike a beguiling note.

Plucked flowers decay beside unmarked graves and statues of gallant English soldiers, who lost their lives here fighting for the Spanish liberal cause in the 1930s, stand headless, victims of vandals. The centrepiece, a large crumbling vigil topped by an eagle, has been splattered with paint, which drips over the English inscription. It’s a sombre spectacle, especially for those with a penchant for local history. 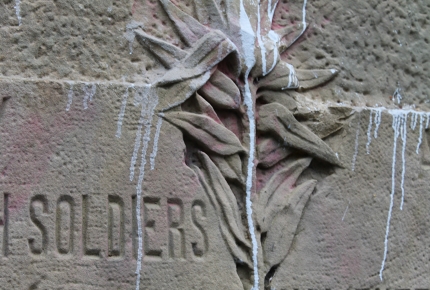 San Sebastián is a town that pulsates with activity. Endless streams of joggers jostle along the seafront, while their aquatic counterparts thread through the silky blue swells come rain or shine.

But after all this activity comes the down time. When the afternoon sun is out the city seemingly empties towards the seafront, where locals loll on benches listening to musicians piping away on clarinets for spare cents.

Grab a copy of Don Quixote from one of the city’s second-hand bookshops and pitch up with the crowds chilling at the harbour edge near Lasta Plaza – there’s no better way to absorb the ambience of the city. 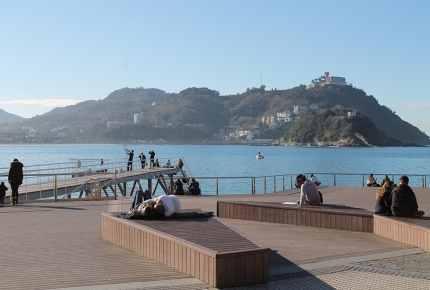