Домой Путешествия A marathon of resistance in the Sahara Desert 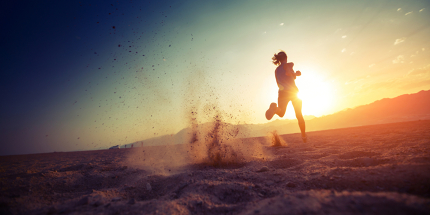 Our correspondent, Beccy Allen, explains why she just ran through a refugee camp in the Saharan Desert.

Not many holidays begin in a military airport, but this trip is different. As hundreds of us, from teenagers to 80 year olds, pile off the plane at Tindouf Airport in southwest Algeria, we begin a journey to understand the plight of the Saharawi refugees of Western Sahara, and a race to raise money for much-needed repairs and projects in their refugee camps.

Navigating Tindouf Airport is an exercise in patience, as the Algerian Air Force slowly pour over our passports. But this pales into insignificance compared to the wait endured by the Saharawi people, who have spent 40 years campaigning to return to their homeland in Western Sahara.

So far they have been unsuccessful and remain scattered between three lands: refugee camps here in Tindouf; a slither of land known as the ‘Liberated Territories’, just north of Mauritania; and the resource-rich ‘Occupied Territories’ in Western Sahara, which are currently under Moroccan military control.

The UN doesn’t recognise Morocco’s claim over Western Sahara, where human rights organisations say the Saharawis’ freedoms are limited and their Bedouin way of life threatened. Having witnessed life in the ‘Occupied Territories’ on a previous trip, I decided to visit Tindouf and take part in the Sahara Marathon to help raise money and awareness for the Saharawi cause.

Joining me in this mad race are 500 other participants from 32 countries. They don’t all have political agendas; in fact many come simply for the thrill of it, keen to take part in one of the extreme marathons that take place across the globe. They know little about Western Sahara on arrival, but will leave understanding only too well the Saharawi plight.

Before the race we have a few days to settle into the slow rhythm of life in the camps. I’m lodging with a friendly local family, who live in a small adobe dwelling and Bedouin tent in Smara, one of the wilayas (districts) within the camps. Each wilaya is named after a city in occupied Western Sahara (Smara, Dakhla, Awserd, Laayoune, Boujdour and Rabouni), a reminder of their continued aim to get back to their homeland.

The silence in the camps is powerful and punctuated only by the sound of children playing. Oh, the innocence of youth. There’s an obvious lack of wildlife: no trees through which the wind can rustle, barely a bird in the sky, a few slow moving cars and Land Cruisers. Free roaming goats and the occasional cat or dog quietly scavenge for food. 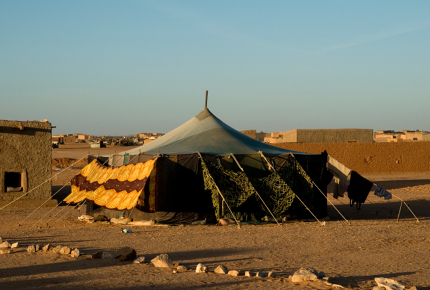 Though silence prevails, the marathon creates a tangible sense of excitement in the refugee camp. The race is, of course, grueling. There’s no escape from the sun, which beats down on me every step of the way, and the sand sucks in my dusty trainers as I labour onwards. The stillness of the arid land stretching out towards the horizon is somewhat overwhelming, but it gives meaning to the slogan adopted by the Sahara Marathon organisers: ‘I run best when I run free’.

Refugees line the path as the marathon (okay, I did a half marathon – I’m not a machine) runs through the camps. The message of the race is a simple one, described poetically by the Saharawi organisers: “You show your solidarity with us through every beat of your heart as you race. This is a marathon of resistance – I hope we all win”.

If my presence in this forgotten land brings hope to the Saharawi people, their encouragement inspires me to push to the finish line, which appears like a mirage in the dusty distance. Finally, exhilaratingly, it’s over.

What I want most at the end of the race is a shower, but such facilities are a luxury the camps don’t have – I do what I can with a bowl of water. The rest of the week I recuperate in my hosts’ modest dwelling, which is undecorated and contains little furniture. We eat together on the floor, around a low table, sharing from one large plate, tucking into feasts of couscous, lentils, camel or fish stews and simple pasta dishes.

Meals are cooked in a no-frills kitchen with just a three-ring hob on the floor. Water from a tank in the courtyard is used sparingly. Light in the evenings comes from the moon and a sky full of stars, and strip lights hooked up to car batteries.

The people here are warm, generous and proud. Children are playful and inquisitive, fascinated by my gadgets and the small items I brought as presents. The women are strong and independent and very much the matriarchs. Young girls giggle about boys, clothes and beauty regimes.

Life is simple, but community is at the heart of it. Friends and neighbours borrow from one another and help wherever they can. Everyone knows everyone and people call in for tea and a chat at all hours. Announcements come over tannoys from the office at the centre of each daira (neighbourhood).

The tea ritual is important to the Saharawi people and many hours are spent preparing sweet black and mint tea over a basket of hot coals, pouring from up high again and again to create a foam on the tea to keep the sand out. We sit cross legged in the tent discussing the situation in the camps, life in Occupied Western Sahara and ways in which the visitors and the residents can work together to make life a little easier.

In the face of adversity there is a sense of hope and a powerful energy among many of the Saharawi people, whose simple desire is to return to their homeland. 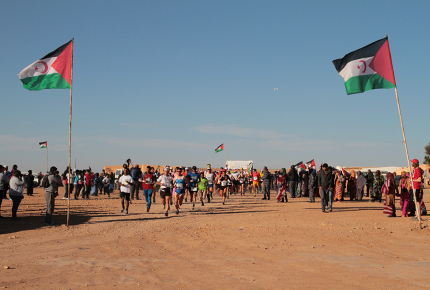 The next Sahara Marathon will take place in February 2017 (dates TBC), but the closing date for entrants will be in December. Can’t wait until then? Well, you could always head to the FiSahara International Film Festival (11-16 Oct), which also takes place in Tindouf. Officially the world’s most remote film fest, this dusty gala is now in its 12th year and has been attended by the likes of Penelope Cruz and Javier Bardem.

The organisers behind FiSahara and the Sahara Marathon arrange flights from Madrid to Tindouf, as well as accommodation and visas.