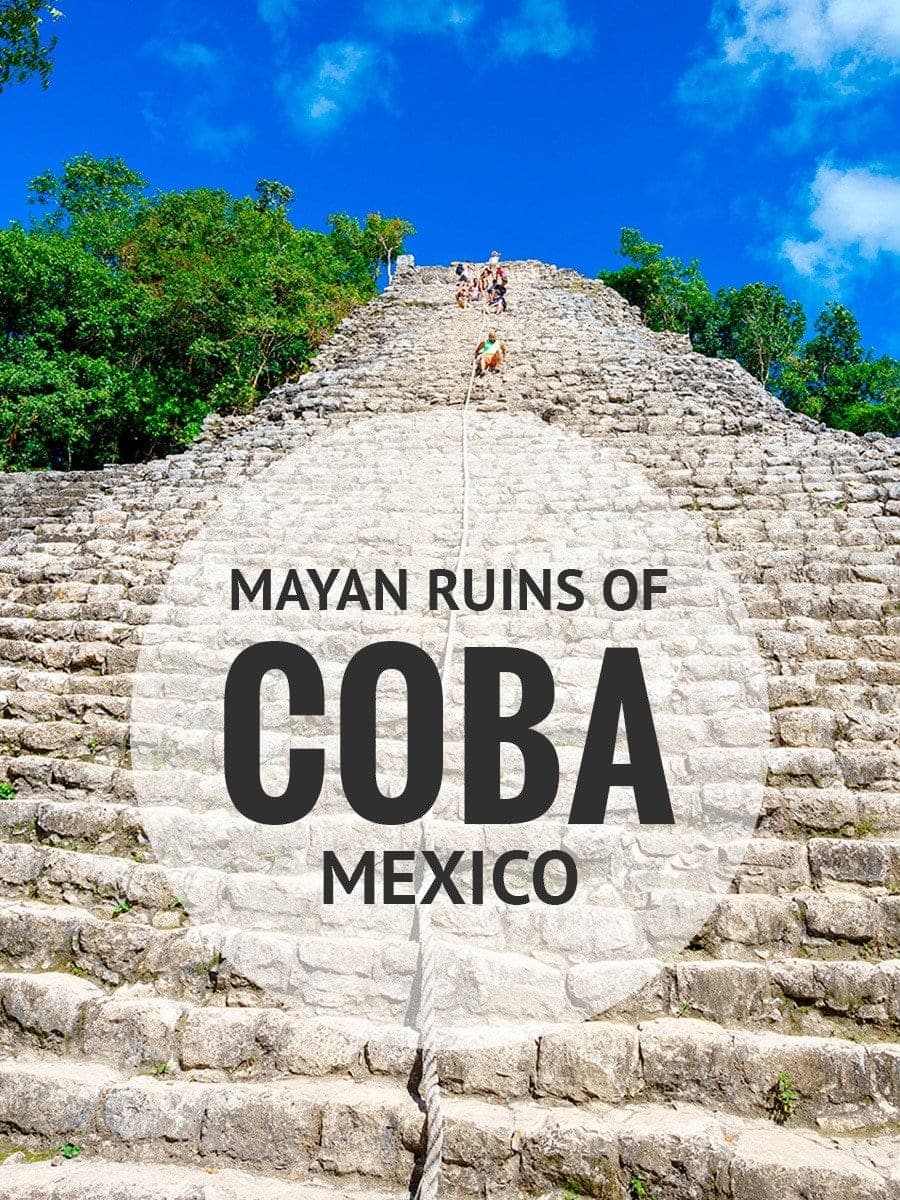 The Ancient Mayan Ruins of Coba

Climbing to the top of an ancient pyramid is more difficult than you think. It’s also why the Mayan Ruins of Coba are one of my favorite archaeological sites in the Yucatan.

Archaeologists believe Coba was an incredibly important city for the Maya people. However due to its remote location, the site is not as popular with tourists as other Mayan ruins.

But there are many reasons to visit the city of white roads.

Because Coba doesn’t see as much tourism as places like Chichen Itza or Tulum, so you can actually still climb some of the structures for a totally different and unique perspective.

Rent a Bicycle to Ride the Sacbes

Coba’s claim to fame is the largest network of stone causeways in the ancient Mayan world, called sacbes (white roads). Over 50 of these roads have been discovered at the site, with 16 of them open to the public.

The raised stone pathways connect clusters of residential areas to the main pyramid area of Nohoch Mul and small lakes used as a water supply nearby. There are three ways to explore the ruins along these roads.

You can walk, hire a bici taxi, or my personal favorite, rent a bicycle.

Mysteriously no one really knows how the Maya transported goods along these roads. While scientists believe the Maya knew about the existence of the wheel, there’s no evidence they actually used them.

One of my favorite reasons to visit Coba is that it isn’t as excavated as other sites, so you feel like you’re wandering through a forest, with many structures still covered in trees.

View from the Top

The largest pyramid at Coba is called Ixmoja, part of the Nohoch Mul group of buildings. The pyramid is 42 meters (138 feet) tall and was the heart of the city. Unlike other Maya sites, you can still climb this one, if you dare!

The 120 stone steps are much steeper than they look…

This is why there’s a thick rope in the middle for safety. But the view from the top is totally worth the climb. A light breeze cools you off from the summit while gazing at the lush jungle landscape stretching out in all directions.

Plus, there aren’t many places where you can climb a Mayan pyramid anymore. As a site gets more popular and tourism increases, authorities eventually restrict climbing to preserve structures and reduce accidents.

Be careful climbing down the pyramid, it’s more difficult than going up!

Coba is a Huge Site

Pyramid of the Painted Lintel

Coba is estimated to have had a population of over 50,000 at its peak. There are many tall stone carved monuments at the complex, called stelae. Some stelae here depict women, suggesting the city had many female rulers.

There are two well-preserved ball courts on the site too, used for playing ōllamaliztli, a traditional Mayan ballgame.

Specific rules differ depending on the time period, but basically players attempted to bounce a heavy rubber ball through stone rings using their hips.

Sometimes the captain of the losing team was ritually sacrificed.

The Mayan City of Coba was first inhabited around 100 AD and was eventually abandoned when the Spanish conquered the peninsula around 1550 AD. However the city was once the most powerful in the region, controlling farmland, trading routes, and important water sources.

Speaking of water sources, no visit to Coba would be complete without taking a dip in the refreshing limestone cenotes nearby. Cenotes are underground sinkholes filled with fresh water, found all over the Yucatan.

There are 3 cenotes just a 10 minute drive away from the ruins.

Cenote Choo-Ha is a shallow water cenote with crystal blue water and many stalagmites hanging from the ceiling. My personal favorite of the three.

Cenote Tamcach-Ha is a deep underground cavern with two fun jumping platforms at 5 & 10 meters (15 & 30 feet) high. Cenote Multun-Ha is a bit further away in the jungle and boasts a large wooden deck.

The entrance fee for each cenote is 55 pesos ($3 USD). They are a wonderful way to cool off after a hot day exploring the Mayan ruins of Coba!

Cruising the Riviera Maya on Motorcycles

The ruins of Coba are about 44 kilometers (28 miles) from Tulum, or (68 miles) from Playa del Carmen. For the budget minded, you can get to the site via ADO Bus from Cancun, Playa del Carmen, or Tulum. Colectivos (public taxi vans) are also an option, however you’ll have to change vans in Tulum.

Renting a car is the most flexible and allows you to visit cenotes.

Or, if you’re a fan of motorcycles, you can rent a Harley Davidson in Playa del Carmen like I did with my friends Evelina from Earth Wanderess & Jeremy from The World Or Bust. The road is an easy and smooth ride.

At the ruins you can hire a guide to explain the history, or just wander on your own. Riding bicycles enables you to see the most in the shortest period of time. Or hire a bici taxi driver to pedal you around, or explore on foot.

Whatever you decide, remember to bring sunscreen & water because it can get hot! Plus sturdy shoes if you plan to climb the main pyramid. ★