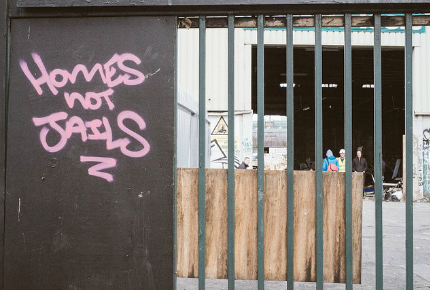 An autonomous arts hub or a squat for sore eyes? James Hendicott spends an afternoon inside the Grangegorman anarchist space that’s dividing Dublin.

“People unknown. We’ll be back.”

That marker went up a year ago, pinned between the heavily-barred warehouses on Lower Grangegorman Road. Now, as promised, squatters have returned for a second occupation – and Squat City is opening its doors for all to see.

Stretching over a site the size of a couple of football pitches, there are at least four chunky warehouses surrounding an open central yard, all heavily coated in sprawling graffiti.

After being turfed out in 2015, squatters returned to the site this year after its new owners withdrew their security. Now Grangegorman is fast finding its feet.

Jay, a visitor from another squat in Limerick, sums up the mentality: “It’s political, in that we don’t believe housing should be something that’s used to make a small number of people a lot of money. There isn’t enough housing, and these buildings and others like them lie empty while people are on the street. It’s amoral.”

“But it’s more than that. People think these places are drug dens, which is part of why they’re starting to open up. People who come down see otherwise. This is about community and about freedom. Some people just want a place to live. For many, though, it’s about having a place to build your creative side,” he says, gesturing to a large piece of graffiti that reads: “weapon of mass creation”.

“The only loser here is the owner, and we don’t care too much about that,” he adds. “These people don’t buy for themselves anyway. All we’re costing them is a totally amoral profit.”

Between 20 and 30 people live in the buildings that make up Squat City, and the detritus of their lives is scattered among the heavily-graffitied warehouses: a clothes line hung in a windy tunnel; a tiny tent tucked in a shady cranny; vegetables sprouting from cultivated corners.

There’s a dusty piano too, sat below what looks like a ship’s control tower. The mattresses strewn on the floor are to catch the warehouses’ falling acrobats.

The afternoon’s entertainment, dubbed Crust Circus, comes in the form of a theatrical recreation, with squatters re-enacting the story of Grangegorman.

It opens with a waif-like character walking a tightrope across the warehouse roof in eerie silence. He lays claim to the site, before the occupants touch on the battle that saw Grangegorman cleared. Its retaking is met with cheers, and the play ends with a commitment to not give up the fight.

It’s well produced and witty: the local garda (police) are played by a trio in fluorescent vests with egg-box pig’s noses who omit regular oinks, while the laws surrounding squatting in Ireland are jokingly drilled into the audience with scattered repetition.

“Private interests should never be put before the people,” comes the killer line. “How can the right to make a profit come ahead of the right to somewhere to live?”

The audience tells its own story: there are hoodies belonging to ska-core punk rebels Leftover Crack and the smell of cannabis is hard to miss. A cheap bottle of red does the rounds along the front row. The atmosphere is overwhelmingly jovial and heated political debate is rife.

One local says the squat has given the area life, while another pair bickers over whether it’s okay to take donations set against anti-capitalist leanings.

This isn’t the first such open day: gigs feature regularly in these ivy-strewn warehouses, as do candlelit spoken word events. One building is even being converted into a more permanent left-leaning arts centre. 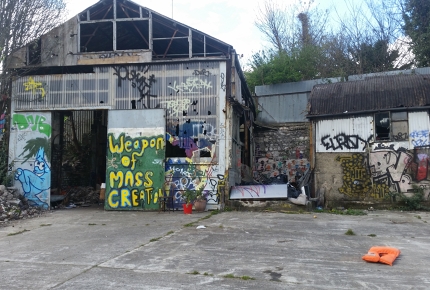 Twin Headed Wolf, a pair whose quirky music involves playing the teapot atop a ladder and using a saw as a rhythm section, says the site is a second home.

“You’re able to propose anything there and do it,” says Branwen from Twin Headed Wolf about the squat. “There is a wonderful creative community and an amazing group of people with talents in many different artistic fields. We feel fully supported in acting on any crazy idea that springs to mind.

“An environment like Grangegorman encourages being brave and can be a testing ground for your wildest ideas,” Branwen adds. “The arts scene is a living thing. People who are squatting have the time and energy to put into their passions, but they also put a huge amount of work into their living spaces.

“We feed each other by following our passions and acting on them. A free space is an essential ingredient in the natural flow of creativity. To us, playing in Grangegorman is playing in front of our friends.”

The squat community is rapidly expanding into other areas of both artistic and political life. An anarchist bookshop is gone, but an annual anarchist book fair is flourishing, selling free-thinking literature and hosting discussion panels on issues that range from social housing and feminism to refugees and global equality.

The media-maligned squat may be unlikely a hub for an artistic community, but there’s little denying that it has become one — and it’s increasingly accessible to the public thanks to its sporadic open days.

However, it’s hard to know how long it will last. No matter how well versed in civil law the occupants have become, under the increasingly frenzied housing pressure of Ireland’s capital, it’s hard to imagine it will be here for very long.

For all its clunky fringes, its rustic surrounds and its ambitious community-leaning approach, Grangegorman comes over as romantic and is crammed full of potential. There’s something almost dystopian about its environs, but this squat is truly an artistic plaything.