Almost all of Venice’s Gondolieri are men. Paula Hardy meets Jane Caporal, the renegade sticking her oar in to change all that.

“When I first started offering lessons in Venetian rowing to tourists, locals warned me, ‘they’ll burn your boat’, but I’m not superstitious,” laughs Jane as she whips back the cover to reveal the sleek hull of her rare batela coda di gambero, a curvaceous, shrimp-tailed boat, handcrafted in oak, larch and mahogany.

“Still, like some sort of Greek prophesy it came true — just not as you’d expect. Having found one of the only two coda di gambero left on the lagoon, I serendipitously won a mooring in a local lottery. My friends all laughed when they discovered that my ‘lucky’ mooring was beside two funeral hearses.”

As she talks, Jane steps up onto the poppa (the raised end of the stern), unmoors and manoeuvres us out of the marina with a few deft strokes of her oar.

Then she shows me how to voga holding the heavy 4m-long (14ft) oar with palms facing down before leaning into the prèmer (push), angling the oar downwards, and pulling back for the stalìr (return stroke). It feels like weight lifting and surfing at the same time.

For thousands of years this was the only way to navigate the shallow bowl of the lagoon with its ribbed, sandy channels, tall grasses and marshes. Standing up and facing forward gives a good view over reeds and water, while placing the oar to one side facilitates manoeuvrability along the intricate canal system.

After a few awkward strokes, I get the hang of it and we slide down the canal over the undulating reflection of pastel-hued palazzi (places). It’s a peculiar experience to find yourself moving within a view that you’re used to glancing across. Like entering another dimension. 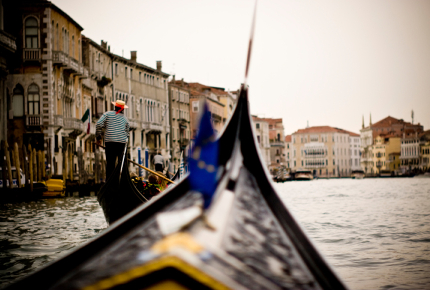 Jane’s story, too, has a surreal quality. “In order to stop the hearses using my mooring, I hung up some Chinese prayer flags.” At my raised eyebrow, she insists again she isn’t superstitious. “What I didn’t realise was there was a turf war between the funeral homes. And, one night, the hearses were petrol bombed. Thanks to my prayer flags my boat went up in smoke, too. I was gutted. The boat was so rare, we had to get plans out of the naval museum in order to rebuild it.”

Gliding quietly down the glassy green Rio de la Madonna dell’Orto, past Tintoretto’s parish church, I find this Montalbano-esque tale quite improbable for genteel Venice. Still, everything about Jane’s rise to Venetian campionessa (champion) is extraordinary.

Unlike most vogatrici (stand up rowers), Jane wasn’t born with the legendary webbed feet of the gondolieri. She wasn’t even born in Venice. Instead she came to the sport late, at the age of 47, after another life in London as a technical analyst.

Now, at 54, she has a string of trophies in Venetian sculling, the mascareta (women’s doubles) and the pupparino (women’s singles); and last year, for the first time, she competed in the Regata Storica, Venice’s most prestigious race.

“When I first came to Venice, 26 years ago, my husband and I rented an apartment on the Grand Canal. From there I watched my first Regata Storica, but it took me a few years to build up the courage to join one of the local remiera (rowing clubs).”

Until the 1970s, so few women rowed that the remiera were de facto men’s clubs, despite a history of female racers during the Venetian Republic where they’d win the same prize pot as their male counterparts (nowadays it’s split 80/20 in the men’s favour).

But once the Venetian Republic fell, the bourgeoisie beliefs of Napoleonic and Austrian rule meant women retreated to the home. The advent of steamboats and motorboats meant there was no need to row in order to navigate the lagoon, although, like some ancient religious ritual, it’s still the only practice that links your body and soul to the fragile ecosystem on which Venice depends. 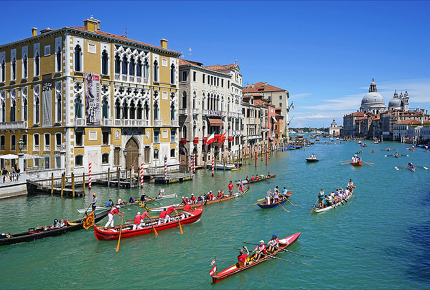 Venice’s most popular, non-competitive regatta, the annual Vogalonga, is a vital reminder of this. Established in 1975 as a protest against the damage caused to the foundations of the city by the waves from the wake of motorboats, it is the only day of the year when motorised traffic is banned from the Grand Canal and parts of the 30km (19-mile) lagoon circuit.

Unlike Carnival, this is a real celebration of vera Venezianità (true Venetian-ness) when residents are more important than tourists and the deep connection between the lagoon and city is evident to see.

By 1993, when Jane first picked up her oars, the long tradition of the voga was in terminal decline. The few clubs still operating had old and waning memberships and of the once 15,000 gondolas just over 300 remained.

Other crafts, like Jane’s coda di gambero, had virtually ceased to exist along with the craftsmen and squeri (boatyards) that the tradition supported.

“I could see that the culture was dying. Most club members were over 60 and they weren’t attracting enough of a young base for the future of the sport.” Neither of Jane’s Venetian sons practices the voga, but instead prefer to play basketball or football.

“I thought the only way to keep the tradition alive was to open it up,” she says. “At the same time I wanted to encourage women to keep it up.”

“So, I gave up my job and decided to turn my passion into a business by giving visitors a chance to experience the voga.” What she wasn’t prepared for was the negative reaction she met with from some of the clubs.

“People thought I was commercialising a Venetian tradition, hence the ominous warning about my boat. But anyone can go to the mountains and learn how to ski, so why can’t people learn how to row the voga?”

These days you can, thanks to Jane’s non-profit organisation, Row Venice. On the day Jane takes me out on the water, we pass Valentina Tosi, the reigning women’s champion of the Regata Storica, showing a young Australian lad how to balance, brake and turn. I can’t think of many activities where champion athletes coach total novices with equipment costing the best part of €15,000.

“When things took off, I thought, ‘how can I train when I have to teach all these lessons?’ So I invited fellow enthusiasts and other competitors to join me. Now we have 20 instructors.” When I remark on her generosity, she laughs and counters, “Well, at least when they’re teaching they can’t train either!”

On a more serious note, she adds: “It’s worked out well. The instructors earn some income, the lessons raise the profile of the sport and visitors get a real insight into Venice’s cultura acquea (water culture).”

“I feel like its my job to leave the sport better off than when I found it,” she admits.

Row Venice offers 90-minute lessons in historic batelli code di gambero and other traditional boats starting at €85 for one or two people.
The annual Vogalonga returns on 15 May 2016, attracting over 6,500 participants from around the world in a wide variety of oar-powered boats from kayaks to caorlina (small barges) and dragon boats. The circuit starts in front of San Marco, loops around the islands of Sant’Erasmo, Burano and Murano finishing with a spectacular run down the Grand Canal. 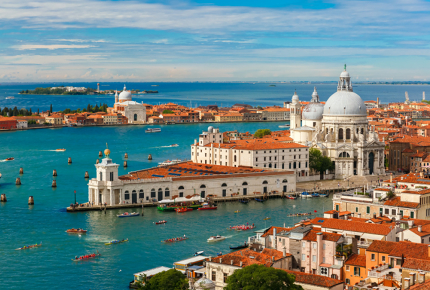